this month the architalk topic assigned to us by bob borson of "life of an architect" was "new year, new _____" a topic perfectly suited for the beginning of a new year filled with fresh ideas, hopes, dreams and projects.

in the architecture world, we're use to dealing with budgets, sites, appointments, deadlines, details, finish selections and colors.  most of the time we're dealing with these items because a client brought a project to us.  well, for the first time i'm having to deal with these issues for a project i brought on myself.

i went and got engaged last month. 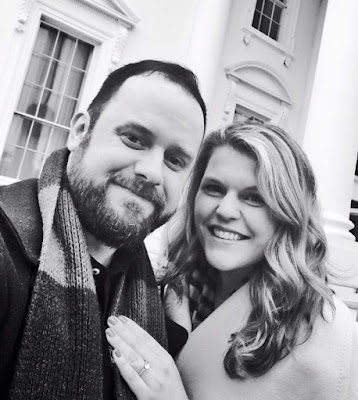 so although all the same issues are there, i'll soon be dealing with bridal details instead of building details, suit sizes instead of structure sizes, cakes instead of codes, and ties much less masonry in their function.  with ten years of project management experience in the profession i feel i have the organizational skills to help plan a wedding, however my fiancee is finding the architect in me is more opinionated about certain details than she may have originally thought or planned.

maybe i'm wrong to be thinking of this as a design project.

for example, my fiancee was slightly confused when the very first thing i asked her is what she though the "parti" of the wedding would be, to which she had no clue what i was talking about. we're also discovering we need to find common ground between our differing visions for the celebration; she keeps using words such as "elegant "and "classy," where as i keep suggesting "modern" and "minimal."  one early idea of mine quickly and completely rejected was my suggestions for the colors. i didn't think the combination of black and dark black was "boring," but apparently it is.  i'm hoping my finish material boards will convince her otherwise.

like most projects early in design, we haven't discussed a budget yet, which is fine because i feel we're still in the "fun" schematic design phase,  however before we roll into design development, i'd like us to have an established budget, site and completion date.  also, just like in a building project, you eventually bring in consultants who can dramatically effect the project. however instead of structural or mechanical engineers, the consultants for this project are called "future in-laws" and i'm sure they'll have their own thoughts and ideas we'll have to factor in.  maybe after the larger parts of the project get more defined....we'll revisit those color selections.


sometimes we bring projects into our lives, other times life brings us other personal projects, like that of our architalks friend rusty long.

"The participants of this ArchiTalks blog post series are asking you to help a friend of ours who is dealing with a family tragedy. Rusty Long is an Architect based out of Portsmouth, Virginia, whose son Matthew is fighting for his life. Here is Matthew’s story, as told by his Dad, Rusty:

Matthew Long was born May 29th, 2013, happy, and seemingly healthy. Less than two days later his mother and I found ourselves in an neonatal intensive care unit waiting room, listening to a rushed intensive care doctor explain how our son needed immediate dialysis to save his life. The disease, he briefly explained, was one of a group of disorders called Urea Cycle Disorders, which impact the way the body breaks down protein. We later discovered that Matthew's particular variant is called OTC Deficiency, a particularly severe form of it in fact, which results in a rapid rise of ammonia in the blood, called hyperammonemia, resulting in devastating neurological damage. This form of OTC is so severe, Matthew has virtually no peers who have survived it. Once the immediate crisis was arrested, we came to find out more about the disease and the impact of this initial event.
The disease is inherited, and the damage is permanent. Treatment consists of a combination of medications, low protein medical diet, and ultimately a liver transplant. Matthew was fortunate to experience no additional hyperammonemic events in the following fifteen months of life, and had a liver transplant on August 24th, 2014. The cure for the disease, a transplant, isn't so much a cure as trading one condition for another. While we will never risk the chance of another ammonia spike, Matthew is on a half a dozen or more medications at any given time to avoid rejection. Despite these challenges, intensive daily therapy for cerebral palsy (a result of the initial damage), limited motor function, and various other challenges along the way, our son is remarkably happy and has changed all our lives for the better. He's taught us to be stronger than we ever thought possible, to have faith beyond human understanding, and the immeasurable value of life.

The #ArchiTalks community is hoping to raise $5,500 to help Architect Rusty Long and his family reach their financial goal on HelpHopeLive.org. If each reader of this post contributes a small amount, our impact will be massive and we can make a difference for Matthew’s family. Click here now and donate $2.00. "

check the other links below to read the rest of the architalks crew and their take on "new year, new______"

don't forget about budget!!! i got married to an architect almost 25 years ago, i think they are the only plans where we were in agreement about almost everything, i though that that i had picked a color that was most un-architect like for the bridesmaids dresses and the flowers, an iris blue-purple, until i was looking at a blueprint (remember this was 25 years ago) and i picked up the fabric swatch, yah, it was a total match :) congratulations!

Just about anything in life can be approached as a design project. Especially something that explicitly requires planning. I think your on the right track with this.