the image of [portland maine]

during my architecture studies, i read the book "the image of the city" by kevin lynch.  its an easy read and if you have any interest in urban planning i suggest it.  to give a very short and generic overview of the book, mr. lynch studied the way people viewed their cities by understanding the [mental maps] everyone has in their mind.  through interviews and sketches he started to see five elements in a city which helped form these mental maps.

paths - streets and sidewalks
edges - boundaries of a city such as walls, mountains or shorelines
districts - large areas of a city with unique character
nodes - focal points or intersections
landmarks - objects or point references easy to identify


couple the fact this is one of my favorite books and i had just moved to a new city i tested myself on my own mental image of portland, maine after living here for a month.  i knew it would change drastically the longer i lived here and i wanted to document my first impression of the city; to make note of what stood out.  since my fiancee was new to the city as well and knew nothing of lynch i had her sketch a map as well to see the similarities and differences.

keeping track of the order in which the elements were drawn, here is what i discovered after we sketched out our maps. 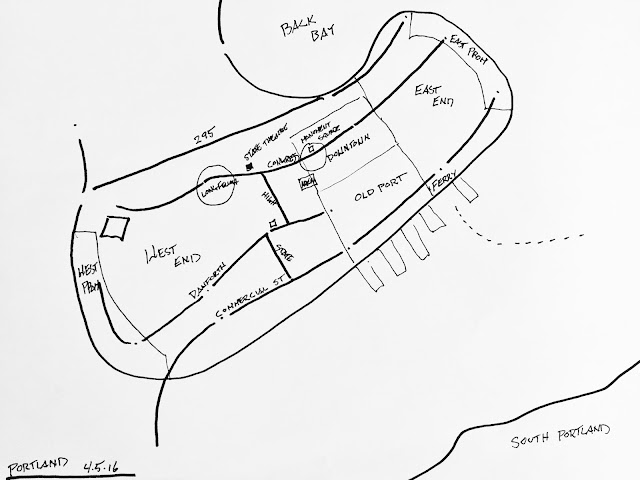 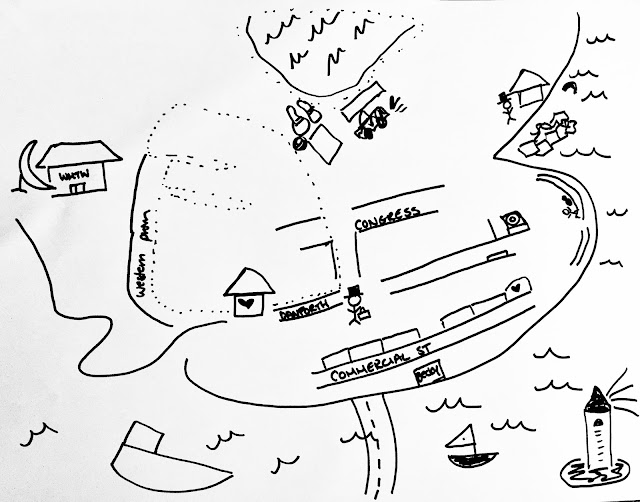 1. portland maine has a very distinct and well defined edge. the very first thing we both drew was the peninsula, showing casco bay and back bay.

2.  the next step was the paths. we both drew commercial, danforth, congress and high streets. arguably all important streets although neither of us new exactly where they terminated. she even had running paths drawn, something i never would have included.

3. after the paths were drawn establishing a referencing grid we both started filling in districts.  we both drew the eastern and western promenade.  my fiancee drew buildings to show old port, while i  drew large squares to show old port, downtown, the west end and east end.

4. now it could be that i knew what mr. lynch was looking for or it could be that as a mid-westerner i love seeing actual squares in the city, but i did draw the nodes of longfellow square and monument square.

5. finally we started filling in our own landmarks. she identified becky's diner, the holy donut, portland headlight, casco bay bridge and the east bayside bowling alley.  all locations visited in the first couple of weeks here. not surprisingly mine were a bit more architectural. the hospital campus, victoria mansion, the arena, the state theatre and the ferry terminal.

now having two more months of mental mapping in my head it's easy to see a major problem portland maine already knows it has.  for being a city on a small peninsula, with very distinct districts, it's water front lacks any sort of major identity or character. although it's cool to know it's an actual working waterfront, in both our minds it was just a series of random docks on a simple line.  however the cities districts with congress and commercial streets tying them all together is an enjoyable and strong theme easily picked up on by two newbies.

as walkable as this city i know our [mental maps] of portland will only become richer, fuller and more intricate as time goes by.
Posted by ercwttmn at 6/14/2016 07:37:00 PM