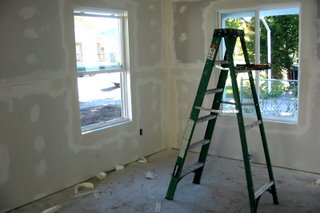 this past weekend, i was able to volunteer with "habitat for humanity". not only did i feel this would be a great project to volunteer with, but it would also give me the chance to step away from the multitude of colored lines on the computer screen and see actual construction. this was the third of four weekends help was needed. arriving at the house, i was amazed at the level of completion. i quickly wondered what could be left to do. upon entering, i soon realized we would be "mudding" the drywall. now i don't know much about house construction, but i do know one area of construction you should have professionally done is the mudding. as i was handed my trowel and pan, i asked if they were sure they wanted me doing this, but seeing that none of the other volunteers had any experience, i was equally qualified. i climbed the ladder, and started "mudding" the ceiling. looking at my progress my only thoughts were for the unlucky volunteers that would be sanding my efforts in a few days. i finished with my half of the ceiling and stepped of the ladder ten pounds heavier, due to the plaster i had covered myself in. i started on the walls. they were easier, but in no way did that mean i did them any better. corners........don't want to even talk about them. finally i found my ninch, nail holes, so that's what i stuck with for the remainder of the day. i have a whole new respect for that 5/8 line i draw on cad. 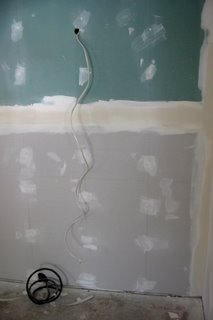 also this weekend, i set up my new drafting table, a recent purchase at an auction. i had been looking for a drafting table for a while. if khakis kill creativity, there's something about that tilted surface that fuels it, and i wanted one. i heard of an auction that had advertised a drafting table so i went to check it out. i strolled through the various items, and finally found the table next to the shotgun shells. i stood my ground and waited for the auctioneer to make his way over. when he finally came, he quickly grouped it in with a work bench, and two saw horses. wanting the drafting table i realized i'd ave to prepare myself to receive all the items. the bidding started. i bid, not hearing any other shouts, i thought that table was surely mine. then from the back in the shadows, another hand raised. the crowds drew silent and parted. it was just me and the "other guy". it was time for a showdown. just like"high noon" only instead of guns we had our auction numbers. it was time to see who wanted this table more. a tumble weed blew past us. it was on. i bid, he bid, the price went up, i bid, he bid, the price went up. i wanted this table. i bid, he bid, the price went higher. i bid, he bid, the price went higher, i bid, he stopped. the auctioneer shouted sold, the smoked cleared, and i was left standing with the drafting table, work bench, and two saw horses, for the final price of 16 dollars. as my adrenalin slowed from this high stakes game of chicken i soon realized that i was the owner of more then i wanted. however i was quickly offered two dollars for the saw horses, and sold the work bench for six. 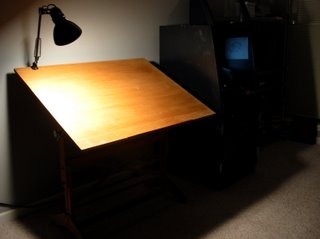 the events of the last couple of weekends however made me start to wonder about my profession. here i am, on the weekends, not needing to work, but finding myself mudding drywall, and bidding on drafting tables. why? why don't i leave that at the office? is architecture one of those professions that doesn't stop at five on friday? are other jobs like that? i have many friends in this profession fixing up and redesigning their houses? while others build furniture, or design greeting cards. is this just part of the job? it just made me wonder... 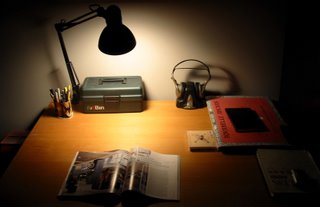 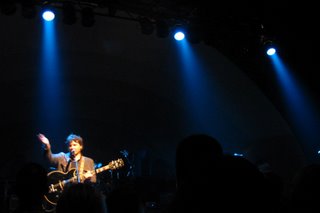 the decemberists may be great story tellers, but wilco seems to fill it's songs with a truth that only years of experiencing life can fill.

thinking back to days and nights spent in studio, it's hard not to have a wilco song playing softly in the background while a panorama of pencils and paper fill my mind. why do i enjoy their music so much? maybe it's the truth i hear in their lyrics, or the way the sound helps convey the feeling behind the words. maybe it's the perfect balance of both, or maybe it's because i wish my own words were as poetic.

i'm not sure i would have enjoyed wilco in highschool. college has a way of forcing one through pain, hurt, sorrow, fear and doubt, with the college of architecture planning and design, handing out higher and stronger doses of them all. however, all those feelings, eventually find a way to their antonyms; relief, happiness, confidence, certainy, and trust. these feelings and the journey from one to the other are expressed in the words of a wilco song.

as a band they are constantly experimenting with their own songs. going to a concert one hears versions unable to buy or download. this might annoy some people, but i find it fascinating. jeff tweedy, once said, after you've created something, and have it the way you like it, take a step back, and deconstruct it. doing this, not only will you find the essentials, but you might just find a more interesting way of building it back up.

i'd like to think that this idea not only applies to alt-country music, but in most of life's situations. 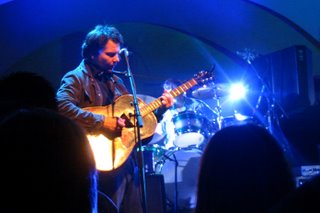 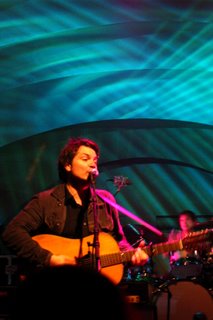 late nights with the [crane wife]

i've been a little stressed lately. 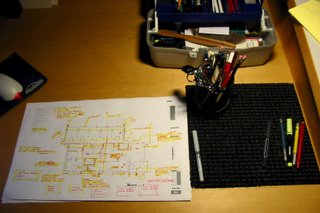 i have my first big deadline due friday, a permit set. having never put an entire [actual] [real-life] permit set together before, the pressure is slowly building because i have no concept of time for this undertaking. in school, by the end of four years i could closely gauge the time required to finish a project. now, it's a shot in the dark.

however the tension was loosened slightly tuesday, as the decemberists came out with their new album, "the crane wife". knowing that i would be spending a few late nights in the office this week, i purchased my copy, and quickly had it playing at my desk.

i keep the volume at a reasonable level during office hours, but as soon as everyone is out the door, the volume goes from 2 to 11. there's something about working late into the night, with the music playing, that is sweetly reminiscent of studio. i don't know if it's genetics or years of habit, but i feel more productive at night. it could also be that when i head into the office at night, i'm able to ditch the khakis for the jeans. i'm starting to believe that khakis kill creativity. at any length, i feel in my element at night, and even with the stack of "red lines" i have to get through, it's a little easier with the decemberists coming through the speakers.

so i guess i'll crank up "o valencia!" and bust out some window details. 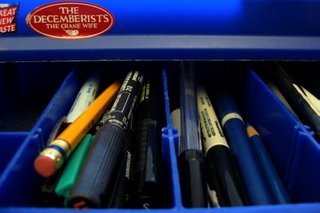 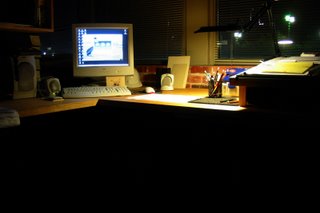