the price is [wright] 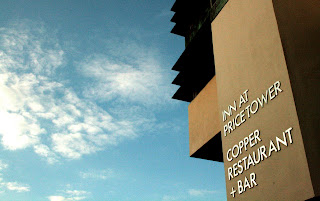 i found myself in bartlesville, oklahoma this past week, and what better way to spend a couple of hours in that town then checking out the price tower, by frank lloyd wright.

now i don't want to go into an architectural critique on the building, and why give you a history lesson when you can just go to wikipedia. instead, just a few interesting facts from the tour and a few pictures.

-opened in 1956
-originally designed in the 1920's as a set of four multi-use towers in manhattan, new york.
- plans for the building scrapped during the great depression.
-resurrected in 1952 for harold price to house his headquarters.
-wrights only skyscraper.
-cantilevered floors hang from a centralized core.
-nicknamed the "tree that escaped the crowded forest".

i found that last item particularly interesting, because while taking the tour, i didn't feel like i was walking in a skyscraper, it felt more like an adult tree house, including tiny elevators, small stairs, constricted spaces, and open balconies.

actually the whole reason for this post was so i could use the title. i thought of it on the drive back, and i'll be honest..it was cracking me up.. 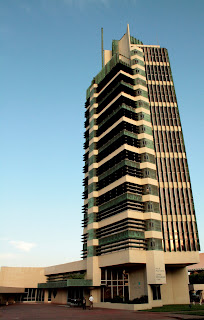 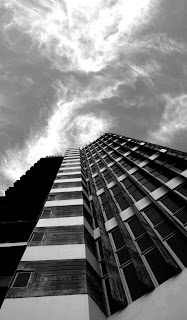 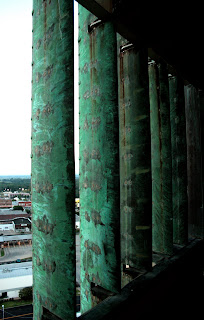 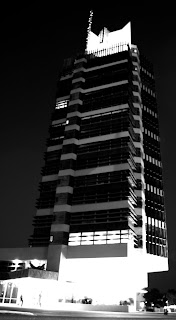 beauty and the beast [liquid version]

the start of [something]. a little tingle in the back of your throat, a few aches in your joints. was it the cold? a flu? or just a bad case of allergies? i wasn't sure. all i knew was as the day progressed i continued to feel worse.

no real need to worry, i had a plan of action. the same action i take whenever that feeling starts. a tried and true method. hit it early with a hot shower and a shot of nyquil.

ha! beat that you "early stage of sickness"!

as the clock ticked down to my bedtime, i jumped in the shower. after a relaxing 15 minutes, i changed into my p.j.'s, and then off to the medicine cabinet.

the nyquil was no where to be found! no worries, i'd look in my little first-aid tote. looking under the sink and opening the tote, it happened again! no nyquil! i was a little concerned. o.k. a lot concerned. i needed that "feel better" medicine to ...well...feel better.

i found some gel caps...what a joke! those don't work. i need the original flavor! nothing knocks the early stages of, whatever you have, out more then the original "green" flavor. what about cherry you ask? ha! that's for kids, i need green! panicking, i started looking throughout my entire apartment, opening and closing cabinets.

finally there it was! i had found it, peeking out from behind the tums was a giant "Q"! picking it up much like an actor accepts an academy award, i realized that it was a little lighter then i usually like my nyquil. it did however appear to have the required 30ml i needed. as i poured this "liquid relief" into the tiny plastic cup, i noticed the expiration date.

it was close enough...i took a shot, and eased into bed.