[act 2] the start of the career

the act opens with our protagonist, fresh out of college, optimistic and confident that what he's learned in the past seven years of college has prepared him fully for the real world.

it doesn't look half bad when you write it out like that. the truth is that i was extremely nervous about starting work today. [why is it that no matter how old i get, i still get that "first day of school" feeling when starting something new?] my nerves were multiplied this morning when i saw it was raining. not only was i not sure about how long the drive would take but i wasn't sure where to park once i got there. as nervous as i was, i found a space, parked the car and walked into the office, a little scared, and a lot wet.

my nervousness didn't last long as i got a dose of office humor as soon as i entered. on my desk was a stack of papers to read through. the first one being detailed directions on how everyone likes their coffee and a full description of how and when they'd like their cars washed.

after playing along and joking with everyone for a bit, i got settled into my desk and given my first two projects. one is to help with the schematic design for a dentist office and the other is a retreat home for a "big brothers big sisters" type organization. i thought they were joking again when they said i'd need plans and elevations for the retreat home by wednesday night. turns out they weren't, as i'm already scheduled to meet with the clients thursday morning and i'll need the up-dated drawings to discuss with them. and so the working life begins.......... 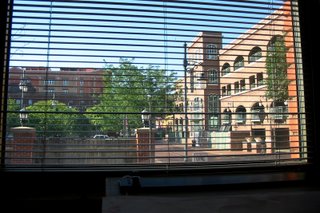 my first "out of college" "starting my adult life" purchase was made yesterday. 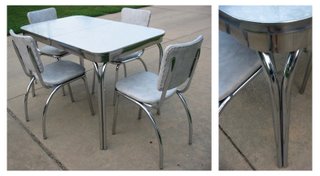 for as long as i can remember, i've loved vintage chrome dinette sets. there is just something about them. i'm almost positive they're the reason cereal, coffee and the morning paper were invented. however being in college, moving constantly, and not wanting to spend any unnecessary cash, i felt it was never the right time. however with a new job, and a new apartment i felt that i could start looking for a vintage dinette set. vintage is the key here. one could easily go out and buy a "replica" dinette set, but they're just not the same. i wanted an original, one built in the era of craftsmanship. there is a reason you still see so many of these dinette sets still in use......quality. the other benefit to anything vintage are the stories you get. this particular set was purchased by a mr. acker as an anniversary gift for his wife in the 40's. she passed on a few years later, but he kept it until 20 years ago when at age 100 he went into a nursing home. the table and chairs were then given to his granddaughter, who kept them until now. both of them kept amazingly great care of it. the only sign of any wear, is the faded spot of formica where mr. acker put his coffee every morning. beautiful.
Posted by ercwttmn at 6/17/2006 05:08:00 PM 4 comments: Links to this post

well, i made it back from my two week working vacation in new orleans. the past couple weeks were filled with a lot of hard work, experiencing local cultures, learning and living. i couldn't possibly begin to share everything i've learned, and know no one would want to read all of it, but i wanted to share a few of the more entertaining facts and pictures. [click pictures to enlarge]

i knew it was going to be a memorable trip, when 30 minutes into driving we realized that the air conditioner wasn't working. so we rolled the windows down, turned the radio up, and drank a lot of water. the first part of our trip was spent in dallas with our friend jackie. we arrived friday night and met up with her and another k-state grad we knew, lee. the night was filled with reflections and advice from them on what to do with your first year from college. mostly they told us not to start working. the next day was spent visiting the local museums. first on the list was the nasher sculpture museum in dallas. 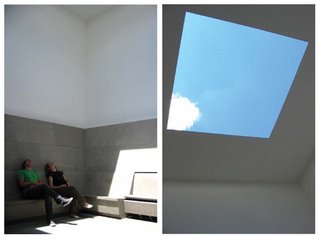 after visiting the nasher, it was on to fort worth to visit the kimball and the modern. however when we stopped in the parking lot, we noticed that anti-freeze was pouring, ....well.....more like, gushing from jackie's truck. i don't know much about cars, but i know that anything gushing from the hood isn't considered great. we decided however to enjoy the day and worry about the truck later.

after visiting two great museums, we focused on the problem at hand. we filled up the radiator with antifreeze bought at a corner store and decided to brave the interstate. five minutes into the drive however, the engine began to overheat and we pulledl over. thanks to aaa, we had a tow truck coming, but that's not before someone else happened to break down in the same stretch of interstate as us, with a flat tire. our new roadside arrival came over to inspect our problem where he informed us he could fix it for 20 dollars. we told him that we appreciated the offer but we already had a tow coming, so he went back to fixing his flat.

after an hour on the side of the texas interstate our tow truck driver daryl came. we were relieved, up until the point where he informed us that his truck had no working gauges and he had no idea if he had enough gas to get us where we needed to go. we did eventually make it home. later that night we went out for sushi with lee and her boyfriends roy, who has the best laugh on the planet. some things i learned about texas sushi that night. jalapeno roll = very good, barbecued eel = not so good.

our mini vacation in dallas was great. it was wonderful to see what our friends had done with their first year of freedom after college.

aaron and i continued to new orleans with the windows down, and our water bottles cold. we rolled into the fema camp around 11 p.m. and met up with our classmates, where they informed us that we would be getting up at 5 a.m. to pour concrete the next morning.

after pouring the concrete and waiting for it to cure, the next few weeks were spent working on the house. with no electricity in the lower ninth ward, we used a solar panel to run our tools. with only a few gliches it worked really well. after putting a sub floor in the house and windows in, the structure for the museum was ready to be put up. the post and beam construction went faster then we anticipated,in two days we had half the structure built. it was amazing to see detailed connections go from cad drawings to actually holding up a beam. 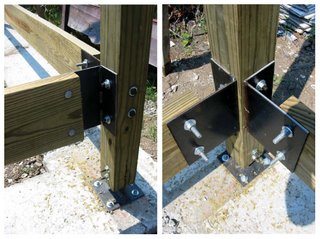 one of the more interesting discoveries in new orleans was the "green project", which is basically a scrap yard for houses. people donate materials and fixtures torn out of their houses, for you to sort through to find anything you might need. you can find anything from lumber to tile to appliances. we were able to find a gorgeous window, a couple wood doors and some beautiful cypress lumber to reuse.

we were only able to stay at the fema camp for a few days. they closed on june 1, the beginning of hurricane season. so we all moved into a house that was owned by a friend of ronald's who had a large house next to the french quarter. the sleeping arrangements were a little cramped, the air conditioner didn't work well, and the neighborhood was a littler rough around the edges, but over all it was a a great place to call home for a week.

it wasn't all work though. one night we had a barbeque, where i was instructed by ronald on the proper way to shell a shrimp, after horribley messing up my first one. one weekend aaron and i were also able to catch the latest vince vaughn comedy, and we ventured around the city trying different foods such as crawfish, fried oysters, shrimp po boys, and alligator tails.

we left new orleans, and stopped again in dallas, where we were able to do a little shopping as well as see the movie, "the sketches of frank ghery". we also visited a couple of our classmates, ryan and danton, who had recently moved down to start their jobs.

the drive back home to kansas was bittersweet, because i knew it was one of the last adventures i'd have with one of my best friends. aaron was the first friend i made in the architecture program after switching, and he has been there for me ever since. he was the friend i needed this past year to constantly remind me to relax and not let situations in my life get me down, and i will be eternally grateful for that. i'm glad that he and i got to spend a few final weeks together before he heads off to the left coast to start his new life.

the whole trip was amazing. not only was it was a great feeling to build a project that i had helped design, but working with ronald couldn't have been better. he was so thankful for what we were doing. his humor and stories on site made the days go by fast, and he kept a supply of cold water for us. i also felt this was the perfect filler between the end of college and the beginning of work. i feel very honored to have helped on this project. i know that rebuilding new orleans is a huge endeavor and i'm proud to be apart of it, but at it's root, this project is about getting a human being into a house, and at it's root, isnt' that what architecture is about.

i'll end this post by showing the adventures of "chip", my roaming gnome. here he is pictured by the site in lower ninth ward, in a traffic jam, in the swamp, and on a parking garage looking at downtown dallas.