as i wrote in the last post, i was unable to learn the history of the oxford mill during my little pilgrimage the other week. there were no old men at the gas station to relate the story of how it came to be or what may have happened to it.

however, due to the amazing and wonderful invention we all know as the internet, i've had some information related back to me about this roadside attraction. a few days after posting, i received this comment from deb hamm.

"Last year, the Oxford School District began leasing the Old Oxford Mill for an entrepreneurship center for our high school students. The community has done a great deal to support this endeavor from volunteering to cleanup the grounds surrounding the mill to recreating a nature trail (probably where you encountered the many mosquitoes!). The high school students sponsor community dining events and private parties in the Old Oxford Mill. I hope you will come again and see the inside of the Old Oxford Mill. It is quite remarkable. Please contact Deb Hamm, Superintendent, at 455-2227 for more information or check out our website at www.usd358.com."

i have no idea how deb found my blog, but hey...isn't that the wonderful magic of sending these little musing into the endless void of the world wide web?

following the www.usd358.com link mentioned above, i found a very nice website devoted to the oxford mill that can be found here, and if you have the time, i recommend visiting it, as they have some very wonderful pictures...as well as a blog!

i think it's a great project for the school district to partake in, and i'm glad to see that this wonderful building has found another use.
Posted by ercwttmn at 6/30/2008 10:19:00 PM No comments:

Email ThisBlogThis!Share to TwitterShare to FacebookShare to Pinterest
Labels: kansas 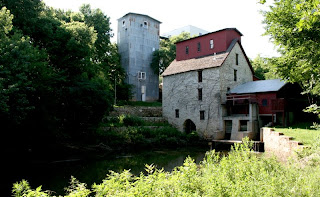 one downfall of returning to work in a city where you grew up, is the feeling that you've seen and done it all. well, last weekend i wanted to change that mindset, and prove to my fellow wichitan's there was indeed "something-to-do-in-this-town".

I had heard of an elusive mill in a small town down south, and i wanted to check it out. i got in my truck, rolled the windows down, turned the old time country station up and headed to oxford. i didn't really have an idea where the old mill was, but surely it couldn't be that hard to find.

i drove and drove and drove....and eventually made it to town. i puttered around the two block downtown, but deciding to mingle with the local folk a bit, i thought i'd stop into the gas station and ask directions. who knows...maybe even get a chance to chat it up with an old man that would relate to me the entire history of the mill and how it had helped oxford out of the great depression!

opening the door, and before i had a chance to look around, i asked,

"hey, do you know where i can find the old mill?"

the teen-aged, slightly emo girl, behind the counter said,

not only was i a little disappointed that my hopes of chatting it up with a bunch of good ol boys had disappeared, but i was astonished that she didn't know where the old mill was! surely this had to be the best thing in the whole county!

jake, looking a lot like kip from napoleon dynamite, came from around the corner....

i asked, "do you know where i can find the old mill?"

great! I had a glimmer of hope! jake, gave me directions as best as he could. i thanked him, got in the truck and continued my quest.

sure enough, jake got me there. hidden amongst the trees, down a long path, there she was....the old mill. i got my camera out and started walking. enjoying the view, i started looking for the best shot. finding one, i knelt down, but before taking the picture, i felt a buzzing in my ear, swatting at my head, and looking at my arm, i found the most mosquito's i had ever seen on my arm...on my arm! freaking out a little, i did the little "there's and insect on me and i want it off dance" everyone does when trying to rid their bodies of bugs.

after my little mosquito mambo, they came right back for more. realizing this was hopeless, i snap a few pictures, and ran for the truck. a little disappointed, but not wanting to get bit, i decided to head back.

during the drive, i passed a wheat field being harvested. i slowed down, and eventually stopped. watching this post-card in motion, i realized that i had found my tourist destination. it wasn't a spot on a map, or an address you could google, it was something better. something real, something honest, something truly kansas.

and best of all, there were no mosquito's!

....however my allergies did start acting up. 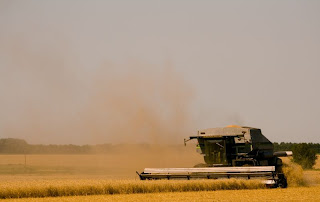 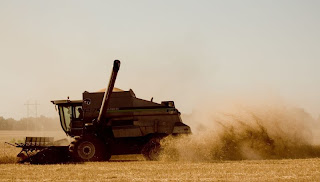 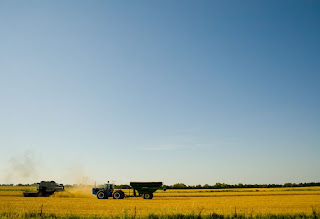 sympathy for the [doc]

but in a way, it's just taken me this long to be able to talk about it. as you may know, a fire broke out on the set of universal studios, and destroyed a number of buildings and sets. more information can be found here. included in this destruction was "clock tower square" which was used in my favorite flick, and possible best movie of all time, "back to the future."

the news was told to me on sunday by my father, who said

"son....i don't know how to tell you this, so i'm just going to say it...the clock tower at universal studios has been destroyed in a fire."

i was devastated. i went through a range of emotions in the next twenty-four hours. i spent the rest of the day thinking of all the good times i had with the clock tower over the years...the storm, the lightning, the 1.21 gigawatts.....

i didn't want to go to work on monday. however i managed to stir up enough strength to head to the office. As i turned the corner to sit down at my desk, thinking that no one else cared, this card was on my desk. 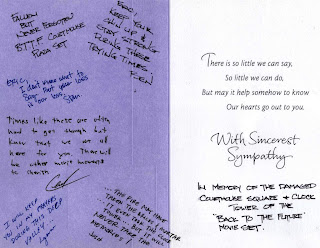 ok, so i'm being a tiny bit dramatic, but the card was real, and it got a big laugh at the office monday morning.

if you have a few spare minutes, read the article above, it was fascinating to see what else the set has been used for. clock tower square was used in "to kill a mockingbird", "gremlins" as well as beaver's school in "leave it to beaver". the surrounding new york street set, can also be seen in "war of the worlds", "bruce almighty", "the music man", and it even portrayed kansas city in "city heat".