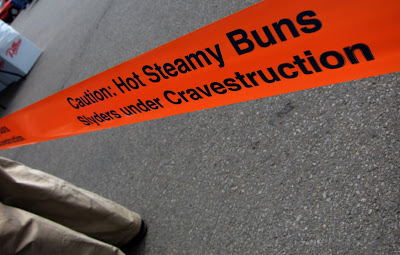 hollywood has its movie premiers, new york has its gallery openings, england has its royal weddings. wichita has its restaurants...

wichitans love food. in fact our little city has the 2nd most restaurants per capita in the nation, right behind dalllas. not only does that give us endless options to pick from on a friday night, but it creates a competitive food market and a breeding ground for new restaurants. several national chains have started here, one of them being white castle. even though white castle packed up their sliders and headed east back in the 30's, today they came back to celebrate their 90th birthday. to celebrate, white castle set up a temporary tent in a dillons parking lot, and invited people to pick up a pair of sliders for 90 cents.

and wichita couldn't have been more excited. 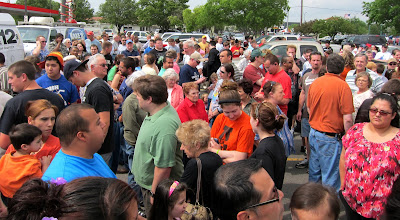 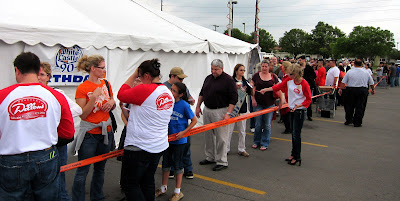 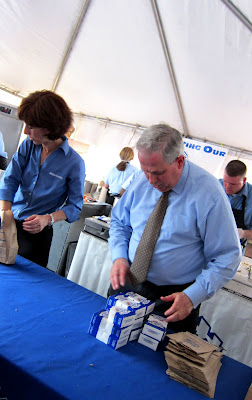 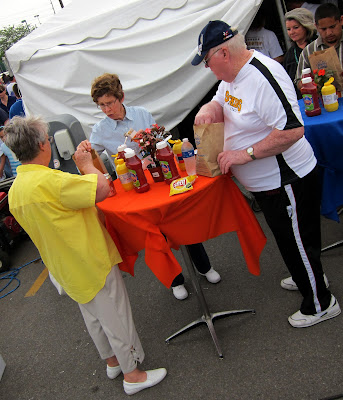 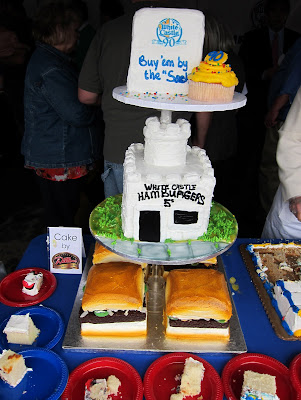 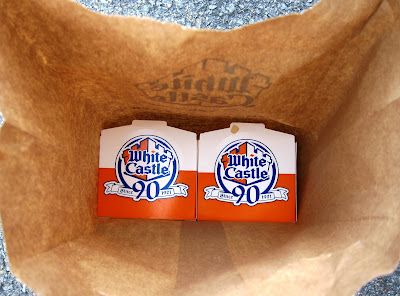 i have a theory. i firmly believe in the land of pandora, no matter where you start, all roads lead to coldplay. twenty days, 1169 songs, and a 1 month subscription later... i proved my theory.

i love pandora. it's a wonderful website which allows you to listen and discover new music based on your own personal taste. however through the years, i've noticed one thing, no matter what station i created, the band coldplay would inevitably be played. you name it: wilco, neko case, willie nelson, kanye west, the beatles...lady gaga, all at some point would eventually share speakers with chris martin.

this is in no way disrespect to coldplay. i think they're a wonderfully vague band. they're alternative rock, you know, not too loud, not too soft...just right. if we were all goldilocks, coldplay would be baby bears porridge. if the world of music was a furr's cafeteria, coldplay would be the cheese pizza. if coldplay were a state in the lower 48, they'd be kansas...right in the middle. if a 30 year old man was driving in a car with his parents, wife, children, a nun, and an astronaut, coldplay could be played and no one would mind. it might not be the favorite of anyone in the car, but no one would ask to change the station. this is why i believe the universe of pandora is centered on coldplay. coldplay's catalog holds a gravitational pull unto which all other music revolves.

much like jake sully, i set out on a wild and crazy pandora adventure to prove my theory. to make this experiment as legitimate as possible i came up with a few ground rules. first, i would find an impartial source and create a station using an artist believed to be the farthest from coldplay as possible. upon creation of the station, i would not add any artists to the mix. as songs were played i would "thumbs up" every single song to show i was enjoying pandora's suggestions. finally i would not skip or fast forward through the songs. i wasn't sure if that effected the variety at all, so i let every song play in it's entirety. my theory was eventually coldplay would be played, and i wanted to know how many songs it took to accomplish it.

on april 19, 2011 i sequestered twitter and facebook friends for suggestions on bands deemed to be "the complete opposite of coldplay". with several people mentioning the band "slayer" i created the station the next day, and the experiment began. i kept a tally by my desk, making notes of artists i felt pulled me in the towards the coldplay center of pandora, which i believe existed. the black ticks represent new songs, while the red ticks represent songs previously played, and "thumbs up-ed". 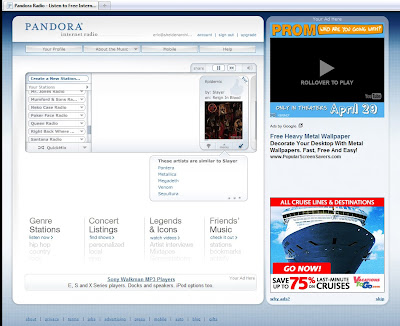 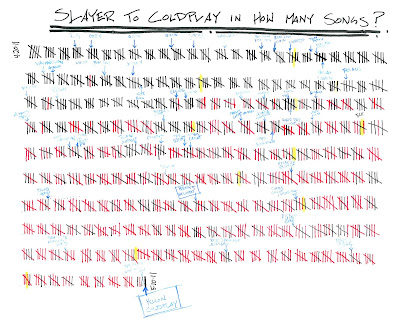 among a myriad of thrash metal bands and songs i had never heard of before here are the artists, and the number at which they were played, i believed to be the major milestones along my journey.

(the next few songs took a weird turn)

(then it got back on track) 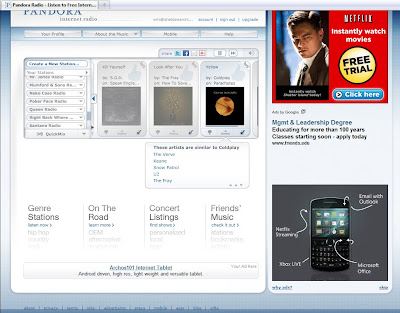 i feel i opened pandora's box with this experiment, and after all the evil thrash metal was released onto the world, all that was left inside, was coldplay.

now, does this really prove coldplay is indeed at the absolute center of the pandora universe? no. does this prove anything? no. was this the most productive use of 20 days, and countless hours? no. is it mildly amusing coldplay was played on my "slayer station"? yes... and mildly amusing is all i ever go for on this blog.
Posted by ercwttmn at 5/11/2011 08:45:00 AM 3 comments: Links to this post 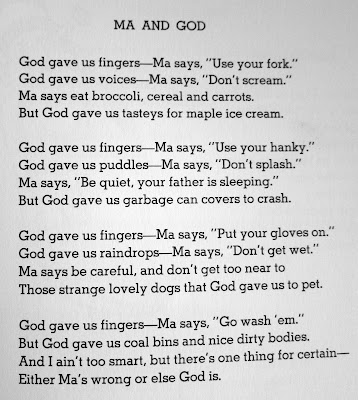 yesterday was mother's day, and with my sister being in town, we were both discussing ways we were thankful for our mom.

as much as we hated it at the time, my sister was thankful our mother never had any pop in the house. pop was reserved for special occasions, and vacations. i wouldn't go as far as to say i was "thankful" for this, but i do think it was a good idea. it kept us off sugar, and avoided indulging in unhealthy calories. however in college, i had my refrigerator stocked with dr. pepper non stop, eliminating any healthy benefits i gained as a child.

what i was thankful for, i didn't appreciate until just a few years ago. while waiting for the bus to pick us up for school, my mom would read shel silverstein poems to us. let me rephrase that, she didn't just read the poems, she would add voices and actions as well. if it was a particularly funny poem, she would burst into laughter upon finishing, making the poem all that more enjoyable for us.

now as a kid, i just thought they were funny poems. it wasn't until recently i started to appreciate shel's unique style. his poems and stories dealt with a lot of emotions and situations, ranging from death, fear, greed, and selfishness to peace, love, unity, and friendship, all presented though in a very "real" style, using slang, and even some slight profanity. discovering all this, i'm very thankful for my mom, for instilling this very "hip" literature in us when we were young. as much as i'd love to say the poetry of shel silverstein had a direct effect on me, i know it had more to do with spending a few quality minutes with my mom every morning.

a few of the more memorable poems 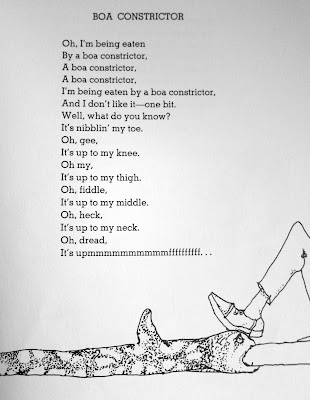 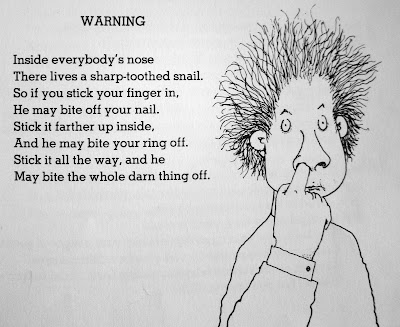 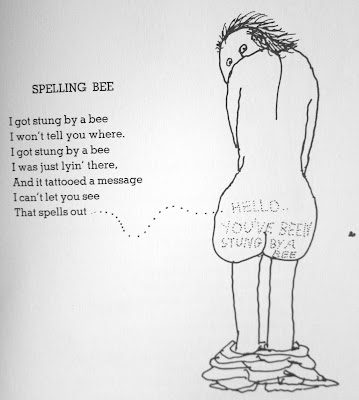