a dose of [kansas] architecture

over the past couple of months, i helped re[vitalize] ar34.

it was originally a publication reviewing kansas architecture. however due to time and lack of budgets, it fell out of circulation a few years ago. wanting to help revive it, a co-worker and i, set out to figure a way put something together, with no money.

the idea we had was to create a user supported, digital magazine. the idea being that anyone with interesting stuff, would submit a project. we'd gather them up, arrange them onto a layout, and have a magazine. it sounded simple enough.

so a call for submissions went out last september asking people to send in any architecture, or art they wanted to contribute. the idea being that anything and everything was up for consideration, as long as it somehow related back to kansas. we had photos from interns, projects from firms and former kansas students, as well as sketches and renderings from students and professors. overall a great variety for the first issue.

attached is a link to the magazine. now it's no "dwell" but i thought this would be a great way for everyone to keep up-dated with the architectural "happenings" and "going-ons" here in the sunflower state. 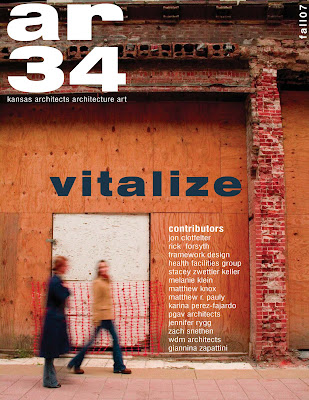 the only action i ever saw on a football field, was back in the high school marching band. but there's something about this time of year that just isn't complete without attending at least one college football game, which was just about my average during college.

i traveled up to lincoln, nebraska last weekend to see my alma mater take on the corn huskers. as it was an early game, a friend and i drove up the night before, and stayed with friends, husker fans no less. waking up early and traveling to the game it was a completely different feel then the little apple. the stadium is in the downtown area, much different from the vast parking lots and fields i was use to. decked out in my k-state gear, we walked to the stadium. during our trek the crowds were full of red, i did my best to keep up with the football jargon, throwing out terms like, "touch down", "running back"and "bcs bowl". i believe i eluded any suspicion of my limited knowledge of this sport.

i'm not going to go into the details of the game. one, because we all know the outcome, and two, i'm really not the type of person you want explaining the game. but as the score went up, and the k-state fans slowly left, i stood my ground, cheering on my team with pride until the game ended.

although it was a different city, although i was with different people, although we lost horribly, the whole experience was very nostalgic. i found myself reminiscing about better times, most notably the weeks surrounding our win against nebraska, november 11, 2000. a beautiful, and exciting season, that i'm thrilled took place during my stay in manhattan.

times change, people change, seasons come, seasons go, sometimes you win, sometimes it feels like all you do is lose, but you try you're hardest to look forward to the next season.

thankfully, we'll always have the memories. 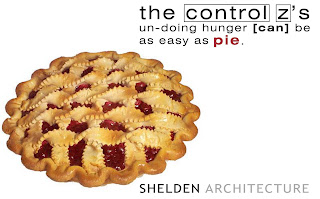 following up our debut last year, my firm once again decided to participate in wichita's [can]struction event.

being the most excited in the office about it, i was elected team captain this year, which basically meant i was voted to receive a lot of e-mails. throughout the past month, i had everyone in the office submit any ideas they had on what object we could sculpt. the list grew and grew, however nothing really stood out as "the one". that was until a suggestion from our secretary. an idea i loved from the moment i heard it. an object i could get excited about sculpting! an object i wanted to see built!

a giant piece of pie!

now what kind of pie to build, led to another week long discussion. a lot of people wanted your traditional apple pie, there was even some discussion about pecan. rhubarb discussed. blueberry was in the top spot for a while. however when the dust cleared, it was decided that the lattice work atop a cherry pie would be the most artistic venture.

a trip to the grocery store and we found our palate. FMV pear slices for the bottom crust, kroger kidney beans for the cherries. (yes it would have been great to use actually cherries, but they were too expensive) and packages of creamy chicken ramen noodles for the the lattice work.

there were five firms competing this year, which made the build a bit more competitive, as no one wanted to reveal what they were building. as the build continued however, the secret was eventually revealed. all the firms had great entries, but for some reason i was partial to ours. maybe is was the most creative, maybe it was the best use of labels, maybe it was the most artistic, or just maybe it was because it was a giant piece of cherry pie! 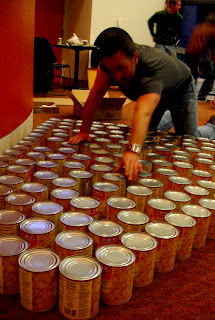 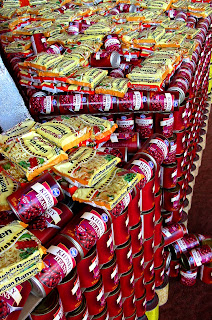 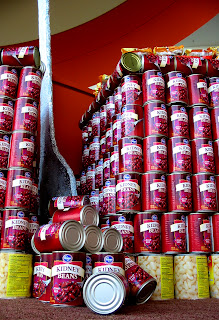 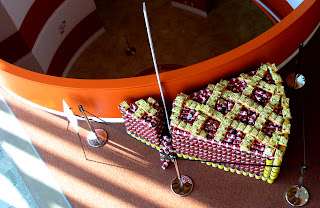