like most people, i’ve been a fan of flag design ever since roman mars did a podcast introducing the world of vexillology to millions of 99% invisible fans. coupled with the fact that i’m proud to be from wichita; a city in a renaissance of flag appreciation due to the fact its own flag was voted one of the best city flags in the country, and it's easy to understand why i might be hyper-aware of flag design.

since moving to maine, i found myself searching for a way to embrace and support my new state in ways other than rooting for the patriots.  a few months ago the local paper did a story about a company in portland making and selling the original maine flag, a design that is arguably better than the states current flag which is your very average an unoriginal, seal on a blue background. upon seeing the design of the original maine flag i fell in love with it's simplicity and immediately went to the companies website.  not only were they making flags, but i saw they also sold patches. this spurred an idea. i thought, what better way to embrace my new home state and promote better flag design then to buy a couple of these patches and put them on hats, so that’s exactly what i did. i bought some patches, a couple of hats, and found someone to sew them on for me!

proud of my new accessory, i immediately posted my new hats on instagram,. since then, i’ve been proudly wearing them around town, with several people asking where i bought them.  it’s no surprise to anyone that knows me, i was thrilled to have a completely original hat and more than happy to tell people who asked, i had in fact made it.

it should also be no surprise to you to understand the absolute shock i felt when i saw someone wearing my EXACT SAME hat just a few weeks later.  same color, style and everything! i couldn't fathom it!  my wife was trying to hold conversation with me but i i kept looking at this guy in my hat! my mind was racing.  is there some company already making this hat? has this been around a while? was i not as original as i thought I was!!! I was all flustered. it got so bad my wife eventually told me to go over and ask him where he got.

i approach a strange man in a bar and asked him where he got his hat, to which he said,  he made it.

(whoa buddy, that's my line) i thought to myself

i said,  “i really like it, i recently made myself a hat just like that a month ago!”

to which he said, “are you the guy that posted it on instagram?”

to which he said “i own the company that makes the patches, and our next product idea is to make hats like the ones you posted.”

needless to say i want from frustrated to flattered really quick.  we discussed colors, styles and how best to sew the patches on.  at he end of the conversation i told him how excited I was to see how the hats turn out.

walking back to the table that night i did have to ask myself one question though; was i at the forefront of some great underground fashion movement eventually leading to the changing of the maine state flag...

had my flag obsession simply reached some nerdy milestone.

only time will tell. 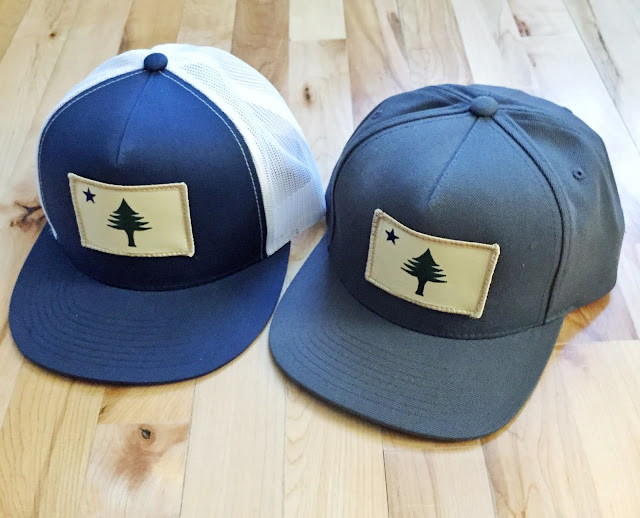