thinking [inside] the box

i'll be honest, i think the wichita architecture scene lacks "hipness." recent graduates looking for starchitecture careers in the field rarely put our city on the top of any lists. being a part of our local aia organization i wanted to change that opinion, even if just slightly.

at the beginning of the year, i told our board, we should do something for the community, some sort of a show to appreciate architecture.  not only did they agreed, but they said i'd be the perfect person to head this "show" up.  i agreed and immediately hoped my butt could cash the check my mouth just wrote.

around march i had the idea we should participate in"final friday" a community event where all the art galleries are open to the public. i wondered though, what could aia show that people would be interested in seeing? renderings...photographs....drawings.....sketches, that's it! people love sketches! incredibly easy yet something architects don't do enough of. how could we get people to contribute this type of art?  it had to be as simple as possible; quick sketches, simple sketches, napkin sketches. boom! i would ask people to contribute napkin sketches! simple enough, but there had to be something more, something to put this idea over the edge of "cool" into full fledged "hip." why not host the event in a "pop-up" gallery! a place appearing out of nowhere, was there for one night, then gone the next!  quick sketches, pop-up gallery, everything was celebrating being spontaneous! that's it! this was the art of spontaneity!

it was this idea i presented to the board in march.  thankfully they were all excited about it.  with wonderful help from all the members the pieces quickly fell into place.  we found a shipping container company willing to donate a unit for the weekend, we found the owner of an empty parking lot downtown who said we could house it there, furniture was supplied and we even found a company who donated cork for the make-shift gallery walls!  the only thing we needed was the artwork.

figuring up how many napkins it would take to fill an empty 20 foot container put us at needing roughly 300 tiny sketches. for the past month we bugged everyone we knew for sketches. friends, family members and co-workers couldn't hide from our requests. napkins were drawn at desks, bar tops, airplanes and dining tables.  the pestering paid off; as we pinned up just about 300 filling the majority of the container. we also provided napkins, pins and markers the night of the show, so people could participate and help the gallery grow.  an activity that was a hit, as by the end of the night we had close to 500 on the walls.  by all accounts, the show was a success and, in my opinion, made the wichita architectural community reach the hipness levels of austin, brooklyn or portland, even if only for a few hours.

i'm absolutely amazed at what a simple idea, along with amazing help from wonderful people can create. a sincere thank you to anyone who came to the show, contributed art or helped in any way! 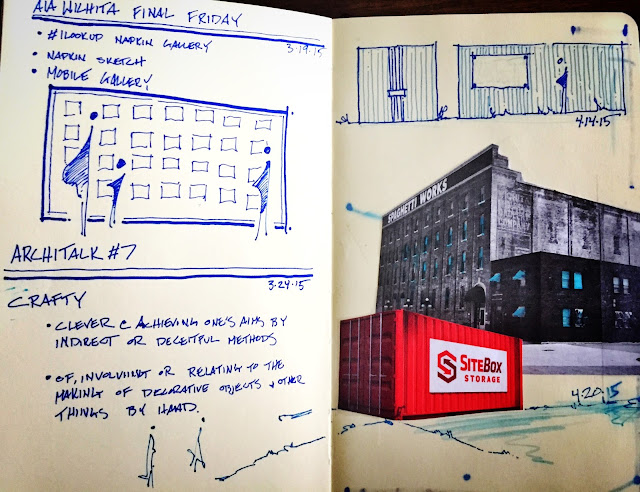 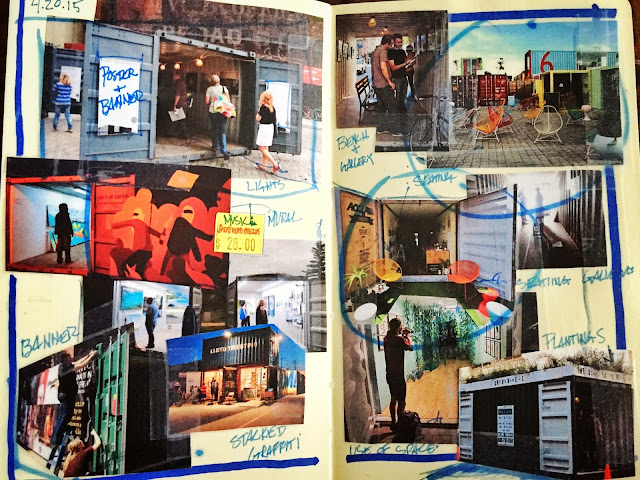 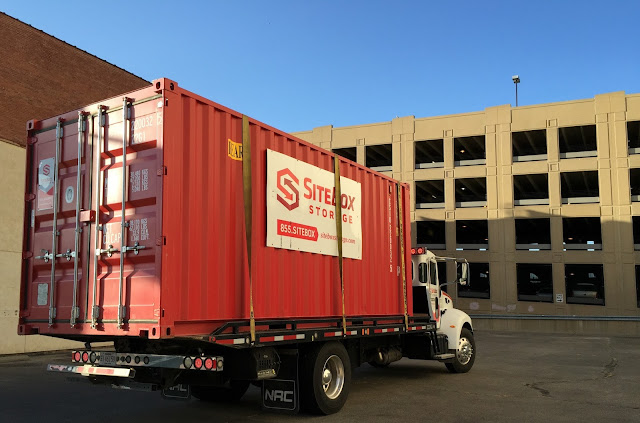 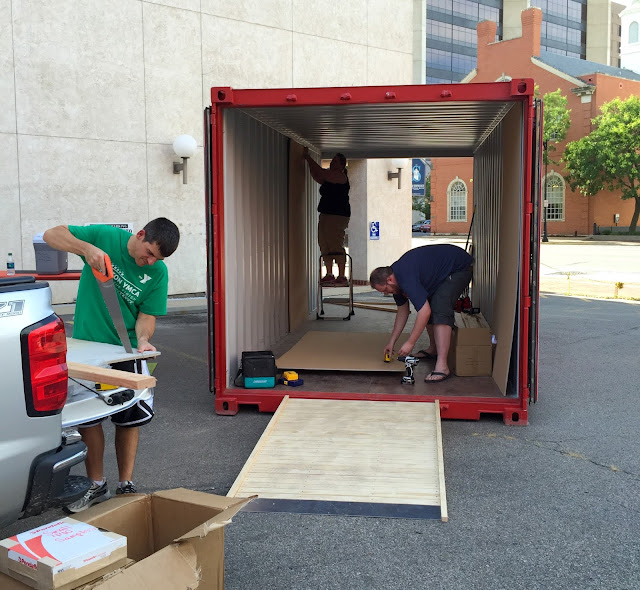 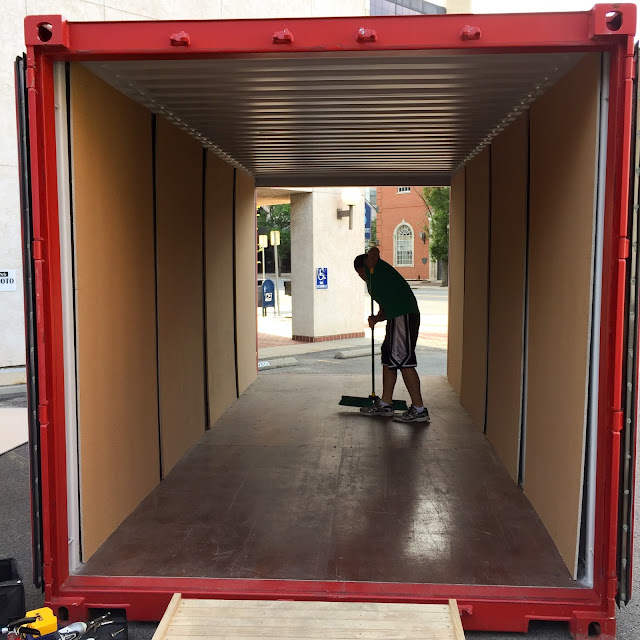 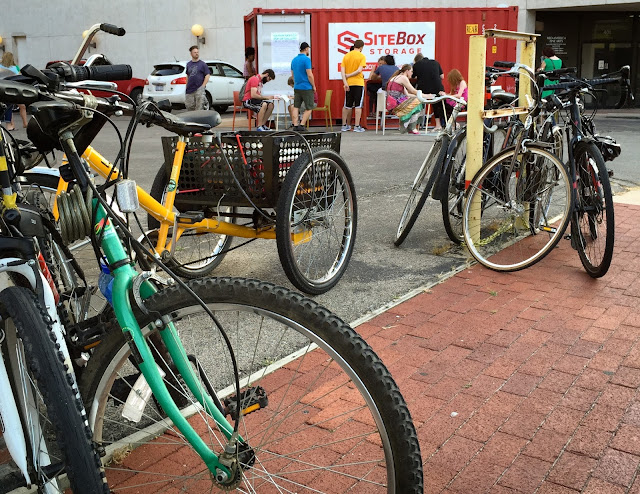 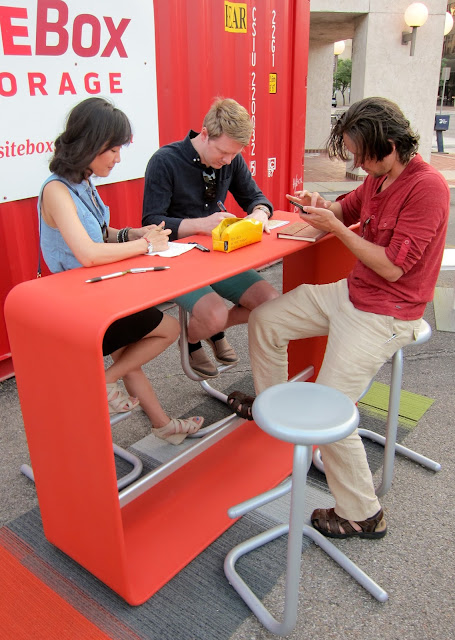 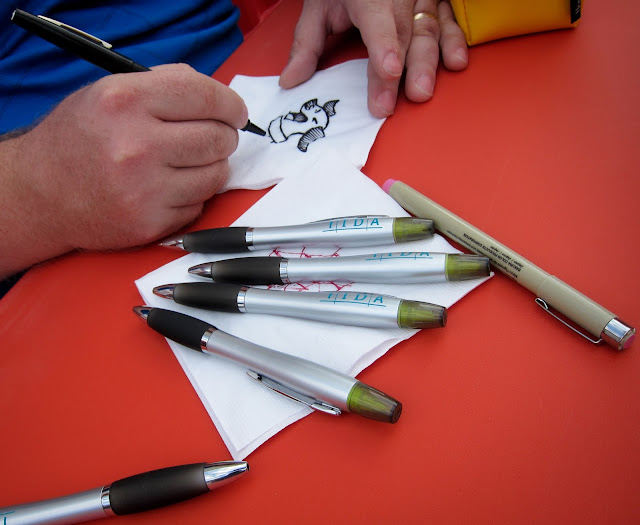 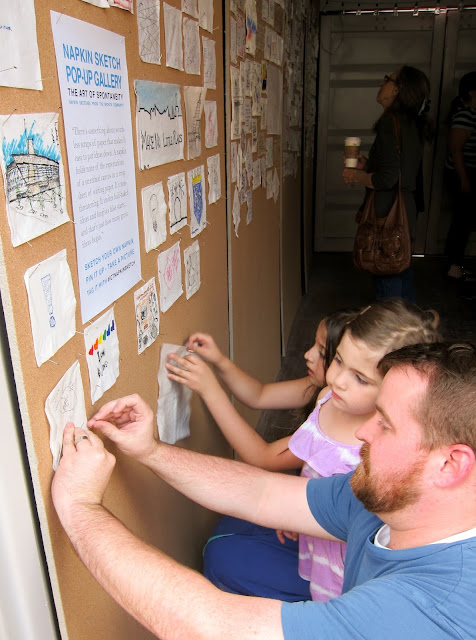 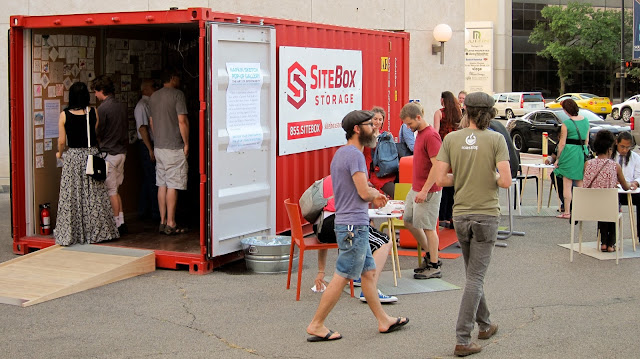 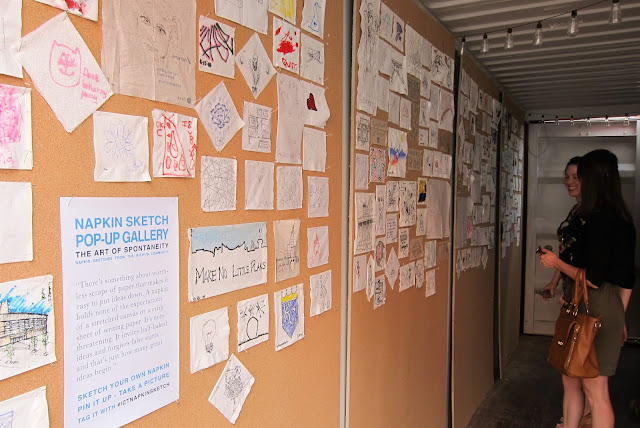 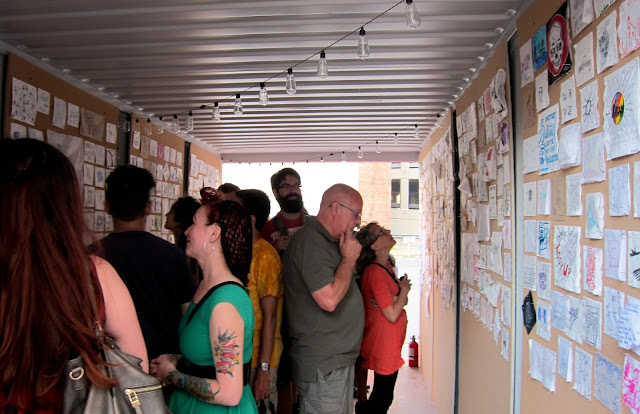 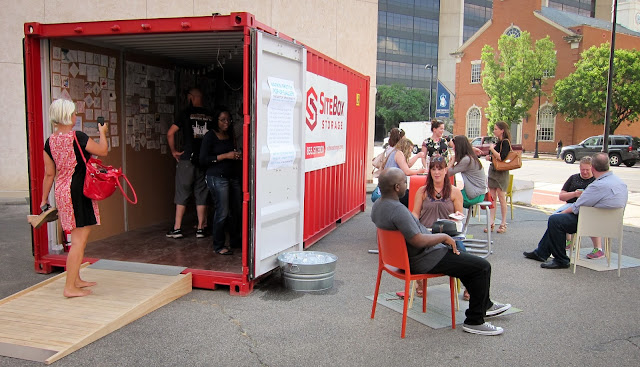 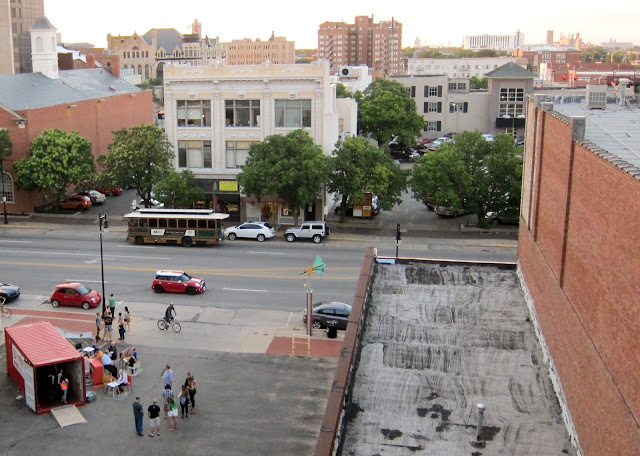 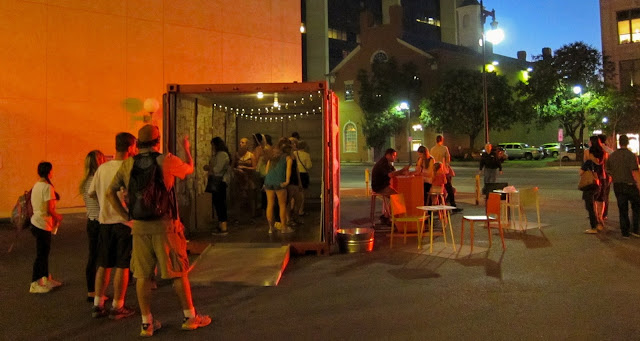 years ago, during my college internship, i was sitting at my desk very frustrated.  i was trying to get a set of stairs to beautifully fit into a space as well as reach the second level.  my principle came over and laughed.  as i looked up he said,

to which he responded,

"the hardest things to design, chairs, stairs and public squares."

he left me pondering as he walked away laughing.

i'm not sure if this is an original quote of his, but over the years i haven't been able to find the person who may have coined this phrase.  it's been 10 years since he told me the phrase and over that time i've realized how true it is.  they may be the hardest thing to design but they are also some of the most beautiful objects to view when done right.  to this day i find myself admiring chairs, stairs and squares.

why exactly are they so hard to design?  i've come to decide they each have their own individual frustrations, but the main reason is because they are so experiential to the user.  all three interact with you on a very personal level, so personal in fact that when done wrong, they become almost unbearable to be in, on or use it.


chairs are incredibly personal.  they must be ergonomic.  they need to "feel" right.  you can have the most beautiful chair in the world, but if no one is comfortable sitting in it, it fails.  reversing that, you can have the most comfortable couch in the world, but if it's ugly as sin, no one, or at least no architect would ever place it in their house.  however, when beauty and ergonomics come together you'll find yourself with a celebrated chair. so much in fact your name will become synonymous with it, see eames, le corbusier, nelson, mies or jacobsen. 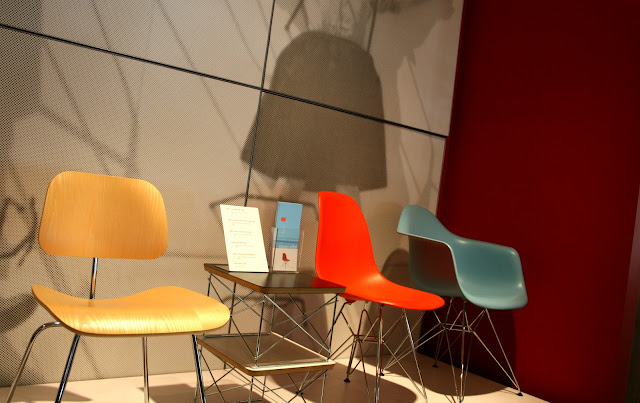 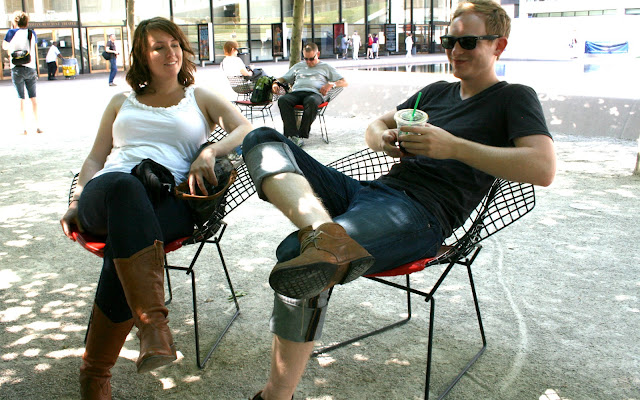 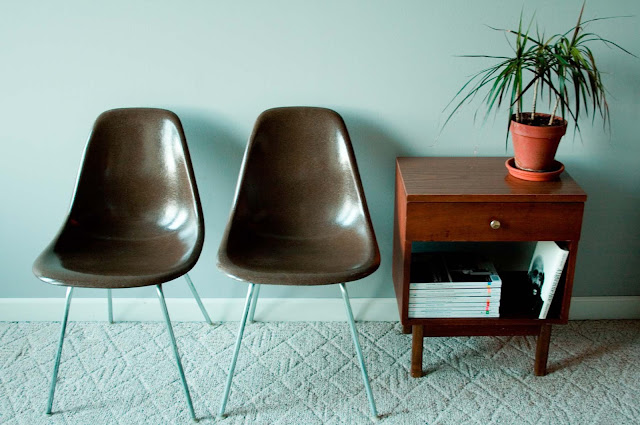 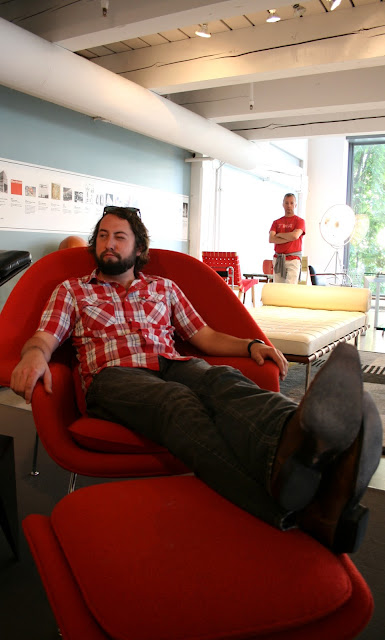 stairs are also incredibly experiential.  your whole body is engaged when using stairs.  while stairs must also "feel" right, the hardest thing in my opinion is creating beauty along with following all the codes associated with stairs. codes are not to be dismissed, they are their to keep us safe.  i feel the beauty in stairs is when you see a flight gracefully and thoughtfully ascending down, detail after detail, all the while following the necessary codes.  stairs are incredibly sculptural, and become more intriguing when you see all constraints surrounding them. 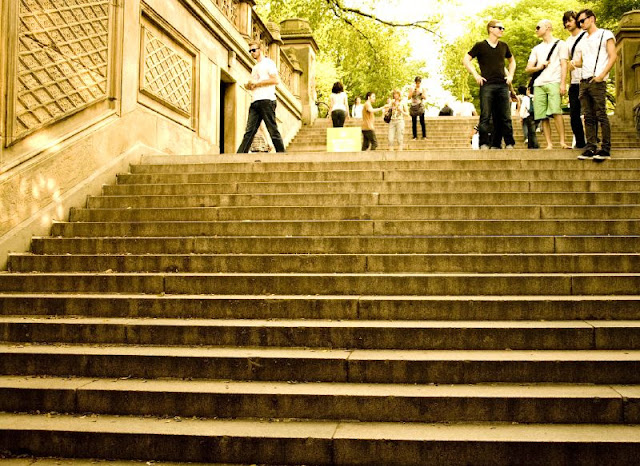 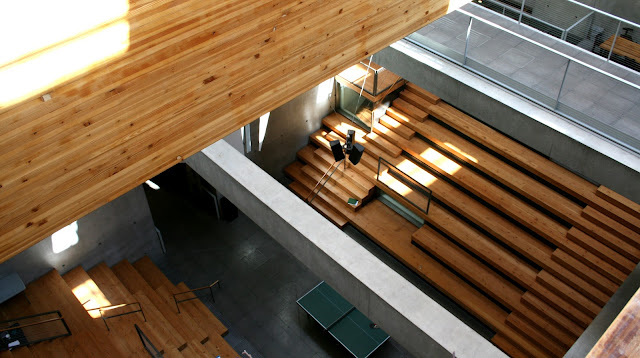 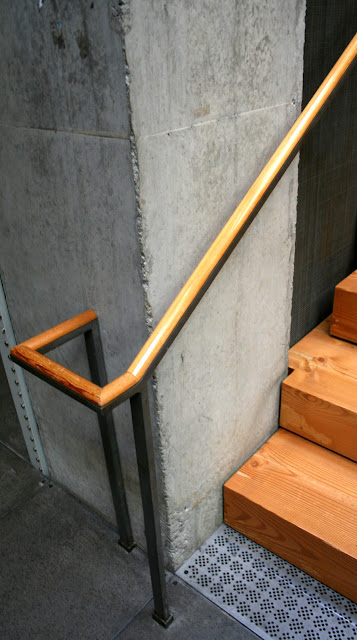 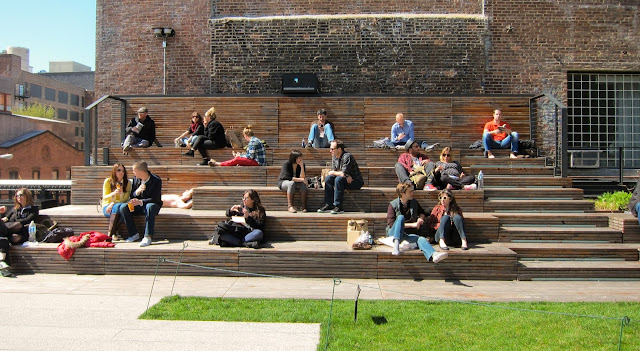 public squares or plaza's are a whole other beast entirely.  whole classes in college are devoted to understanding them. professionals have spent entire careers trying to figure them out.  it still comes down though to does it "feel" right.  does it make you feel safe? is there a focal point? is it too wide? is it to long? is it elevated or sunken? is it landscaped? is there a variety of seating options? are there public and private realms? is there activity nearby? is there circulation?  thousands of tiny little questions and answers come together to make or break an open public area.  if done wrong, plazas can be empty spaces that breed crime and other harmful activities. however when done well, they can be a thriving node of a city; a place where the city feels alive. 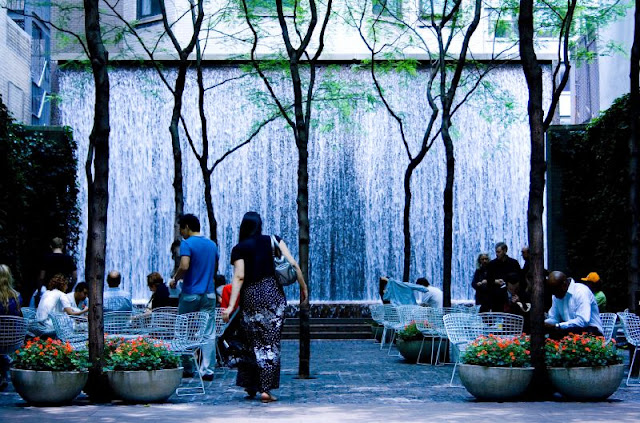 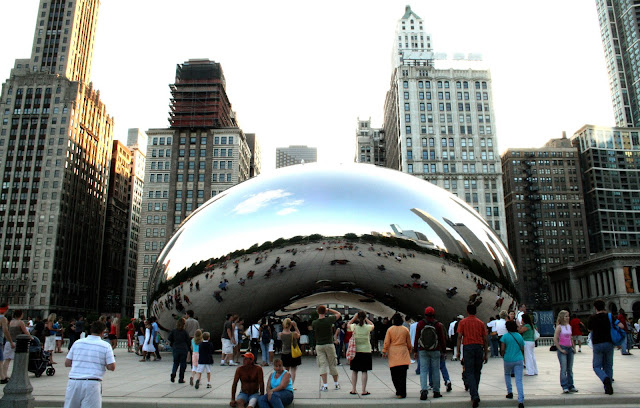 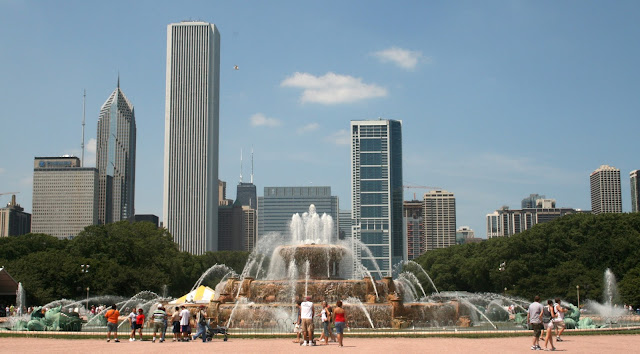 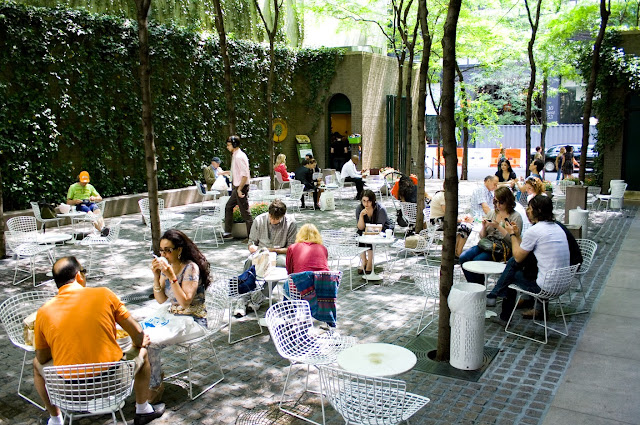 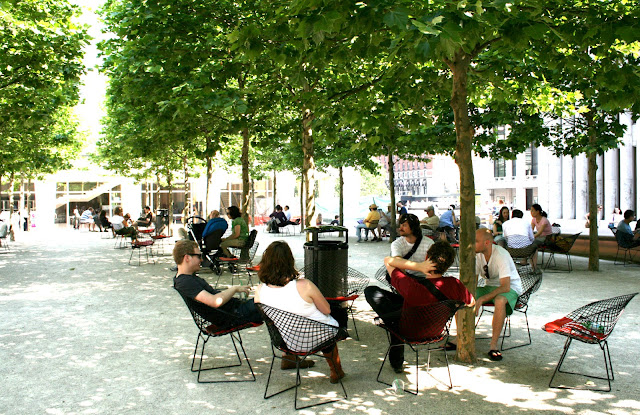 please follow the links to other architects talking about their three favorite words in this months architalks.

Enoch Sears - Business of Architecture
@businessofarch
3 Words To Get Started