the winter of my [disorient]


mid february found maine hit with three back to back snowstorms, which meant that by the time the last snowflake fell, we were left with about 2 feet of snow on the ground.  i was in awe.  i had never had to deal with that much snowfall in my life!  i really wish i could have told you was able to get out of the house and enjoy it, but i can't.  i hated it actually. it was beyond annoying.  for the first time in my life i had to shovel the snow off my car. not scrape, not dust off, but legit SHOVEL it off, and not just once either!  i didn't want to leave the house either, because it sucked to walk in. plus i was tired from the car shoveling.  also, if you were lucky enough to get to a clear sidewalk, the 6 foot snow banks the plows left at the intersections kept you from going more than a block.  it sucked.

on a positive note however, the snow allowed me to partake in another new england winter tradition; walking to your neighborhood bar to ride out the weather with your neighbors.  making it to my local bar also let me witness, for the first time people skiing into a bar, that was not on a mountain.  i wish i could share more interesting photos with you, like people sledding down the eastern promenade, or historic buildings in a blanket of white, but that would have meant i would have had to go outside and trek across town, which wasn't going to happen.  nope, the only photos i have to share with you from the storm are the ones i took on the few block walk the bar, which was enough of a winter adventure for me. 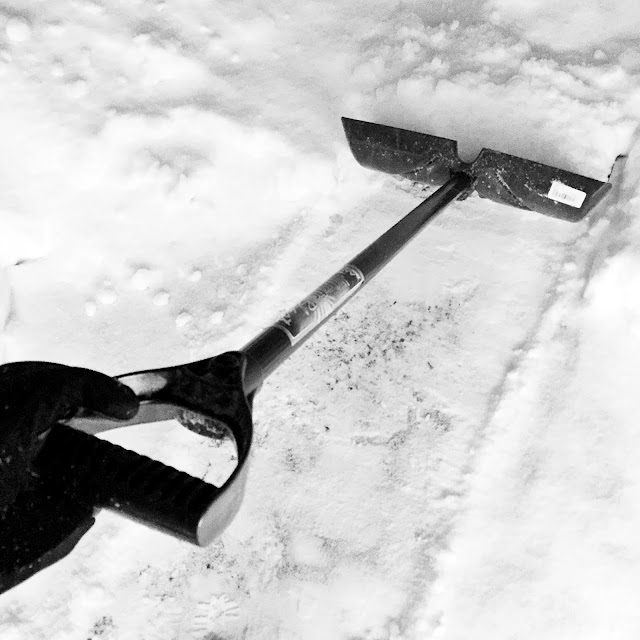 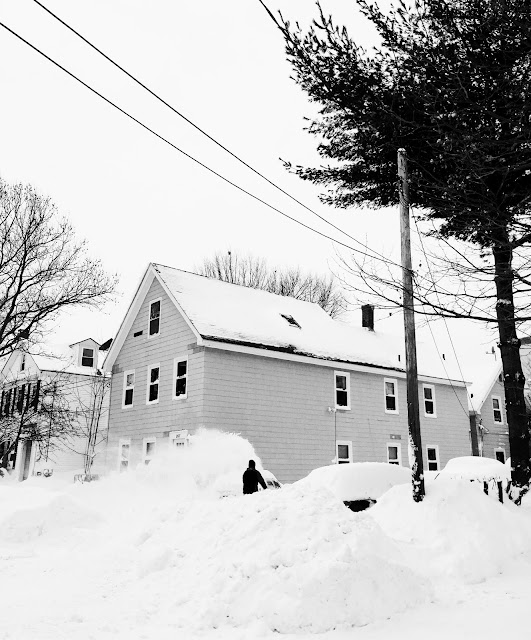 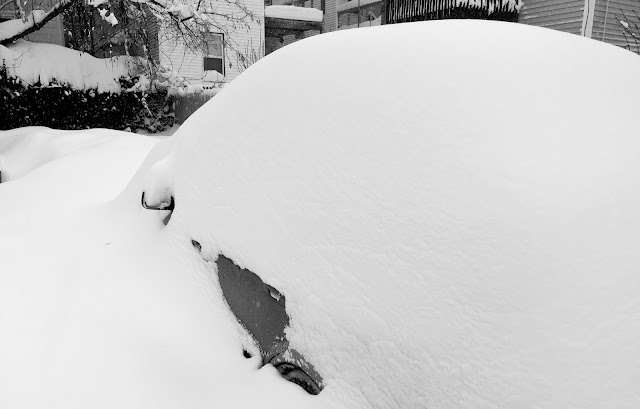 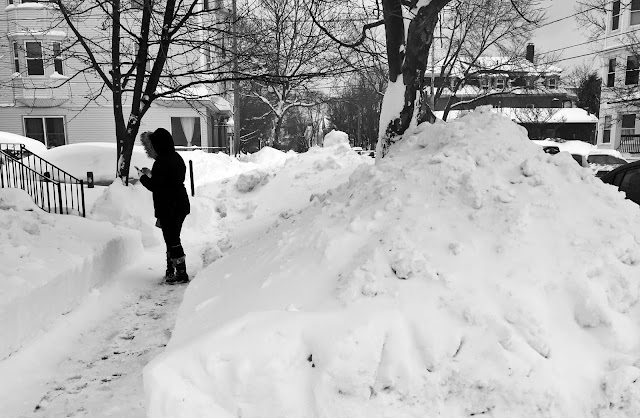 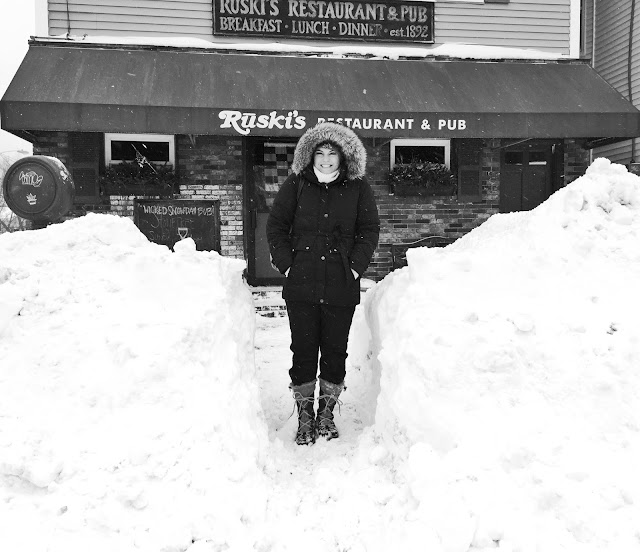 sometimes to experience something new you have to jump in to the [frozen] end of the pool.


i did just that when i went ice fishing the other week.


since moving to maine, i had been wanting to go ice fishing.  an activity i had seen in movies but had never experienced  luckily, a couple of my friends knew this and invited me out one evening after work.  little did i know what i had just gotten myself into.

we drove north, which i've been told is where the [real] maine is, unlike the area i live in which is called northern massachusetts.  it was dark and got got darker as we left the lights of the city behind us and wound our way into the frozen woods.  after about an hour we stopped and unloaded the equipment.  the supplies consisted of buckets, beer, sabiki's and fishing poles that looked like the ones i had as a child.  we hauled the gear to a little hut where a guy who didn't say much took our money, unlocked a small closet door, put the money in, grabbed a can of worms and promptly locked the door again.  this had me curious for a couple reasons. one, either ice fishing is more lucrative than i originally thought or these are some wicked aggressive worms he's giving us.

we received our hut number and headed out across the frozen water.  as it was an outgoing tide our hut was on the far side of the river.  as i heard the deep and scary sound of ice cracking in the distance, it occurred to me i've never walked on a completely frozen river.  that fear quickly subsided as i gazed upon the fishing huts.  dozens of windowless shacks that looked like some sort of punishment box in an isolation camp.  it felt like i had stepped into the middle of a doomsday prep-er convention; like ted kaczynski had designed a cul-de-sac.  inside however was a different story, i opened the door to find a toasty warm cast iron stove with plenty of wood.

the rest of the night was spent learning how to smelt fish, which, as it turns out are tiny fish attracted to the nastiest worms i've ever had to use as bait. i now understood the locked door.  we chatted, we drank, we listened to billy joel....we caught tiny fish.  i had a really good time, which was exactly what i needed to help me get through my first new england winter.  one of the more interesting aspects of the night was meeting the other people fishing in the huts next to us, who would occasionally knock on our door to see how the fishing was going in our camp. they were an interesting group.  imagine if you will the type of guys that would sit on a frozen river, in the middle of the night, away from society, in a tiny windowless hut, to catch, fry and eat tiny fish.  if you can picture that, you're getting close.

the funny thing is, for one night, i was one of those guys, and i really enjoyed it.

i felt just a little more [mainer] on the drive home that night. 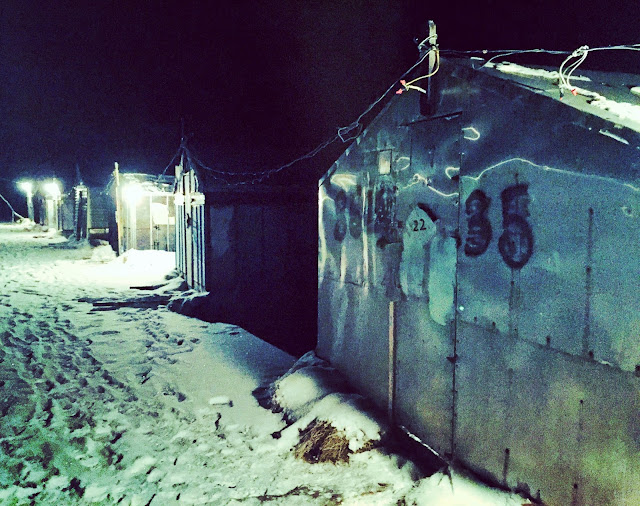 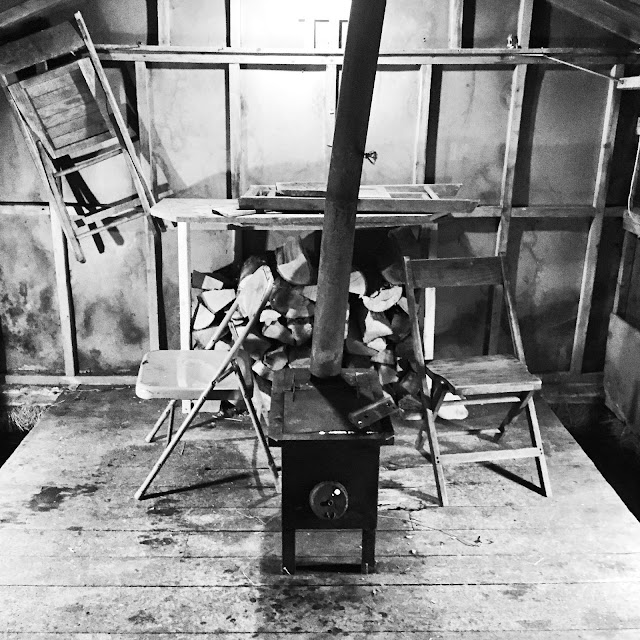 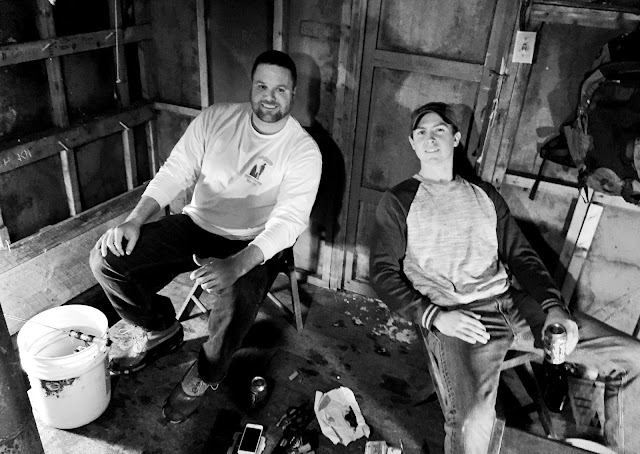