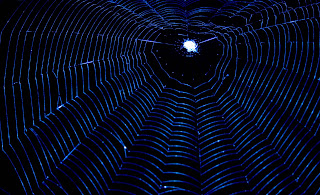 i was coming home late from work this week, making my usual trek, not really paying attention, when i nearly ran into the largest spider web i've ever seen. i flipped out, i really did. i hate spiders.

i took a step back, and shook off the "willies". staring back at the spider's web, i'll call her charlotte, i noticed it wasn't complete, but she was in the middle of making it! i was amazed! the precision, the delicacy, the accuracy. it was beautiful. before long i found myself standing and watching for a while.

my mind must have still been in "architecture mode", because as i sat there, i started to critique the web. it was very minimalist. she only used one material, silk, which seemed natural, and it was only placed where it had to be. it seemed to be extremely functional. the structure is primarily used to catch food, and it would appear that a "web" is the right shape and style to use. it seemed to be incredibly sturdy as the blowing wind didn't have much effect on it. the scale seemed to fit for the size of occupant, it wasn't one of those "mcwebs" you see being built in the suburbs. it wasn't gaudy, but instead blended into it's environs very well, yet still stood apart. i'm not sure if she was going to apply for LEED certification or not, as it seemed to be pretty self sufficient.

it wasn't all praises, however, as i did want to question her and ask if this was just "fad" architecture. i mean really, with halloween being so close, and the structure's originality, come on, couldn't she have though a little outside the web, just a little...

but those critiques fell by the wayside as i realized that i was witnessing instinct at work. charlotte was born with it. she wasn't thinking of any of that when she started out, she was simply doing what she knew how to do, and it was beautiful.

of course this whole story would have been much shorter, and less inspirational, if i would have stumbled upon her in my closet.

i woke up the next morning, almost hoping that she had written "happy halloween" onto the web, but when i went down and checked, it was gone....... 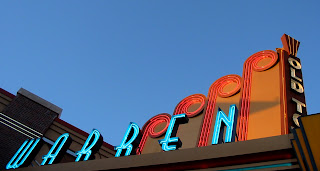 well, i've lived in the downtown area of wichita for well over a year now, and i'm finding that i'm starting to look forward to certain events. this past weekend was one of them. 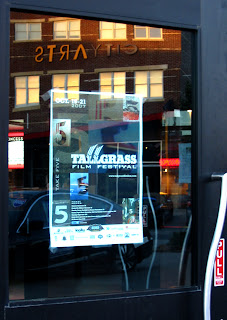 i attended last year and loved it! i was amazed that wichita, a city that isn't exactly topping any cultural center lists, put on a film festival showcasing independent films, shorts, documentaries, and foreign films. i know i wasn't the only one to enjoy it, as the festival grows every year, quenching the people of wichita, thirsty for a little something different in the theaters.

needless to say i was excited to attend again this year. not only for the films, but i thought it would be good professional move on my part to be seen hobnobbing with some indie directors, trying to boost my totally imaginable and made-up career as a film actor.

the films were at a number of locations around town, i however stuck to the old town theater, where most of the films were playing. this year i attended a documentary called "twisted" which follows eight people and records how becoming a balloon artists has changed their lives. next was a series of shorts all falling under the theme "truth and fiction", films that blur the lines between reality and imagination. "i met the walrus" was amazing. Finally a documentary called "blood on the flat track". a documentary about the sport of women's roller derby and the rise of the rat city league in seattle. more interesting then the movie however, was the fact the audience was filled with girls from wichita's own roller derby leauge. something i had know idea even existed. 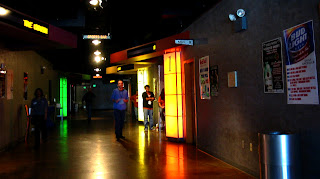 all the films were interesting, i'm not sure i'll be standing in line when the dvd's are released, but i still enjoyed them all. what i love more then the films, is the event itself. it's a little jewel that almost disappears in the small shadows of our downtown, but once you find it, it's wonderful. to those of you that say there's nothing to do in wichita, i say nay! it may be harder then other cities where culture almost bursts at the seems, but here in the ict, you have to look and pursue interesting things to do, but once you do, it's worth it.

i'm not sure if i've ever fully endorsed a product on this blog or not...well, i am now.

last week, i went to grab a bite-to-eat, with a co-worker. the conversation took the usual course, jumping from current projects in the office, to weekend plans, it however ended abruptly when he pointed at my shirt and stated that i had spilled on it!

i looked down to see the damage.

it was true, i had indeed gotten marinara all over my shirt. being somewhat embarrassed and a little upset, i wondered how this could have happened! i had been so careful. peering down, i pulled a "columbo". judging from the angle of the spots, it had not been a direct drop, but instead, must have fallen off the fork, ricocheted from the plate, stopped, in mid air, made a 90 degree turn, and then land on the shirt.

other then wearing a huge adult-sized baby bib, i have no idea how one avoids situations like this! nothing makes you feel more like a slob then going back into the office, looking like you ate in a "booster seat".

sensing my annoyance, my co-worker gave me some advice on stain removal. coming from a married man, with three small boys, i felt he had expertise. he mentioned that his wife always carries around a "tide-to-go" pen.


driving back to the office, we stopped at the nearest store. I rushed in and found what i was looking for. as i paid for it...spots on shirt...tide pen in hand, it was apparent the cashier was holding in his laughter. i appreciated it.

upon reaching the office, i followed the directions. as advertised it worked! as the applied area dried, it left my shirt spotless! I was thrilled!

needless to say, this little guy has found it's way into permanent placement within my "man-purse". 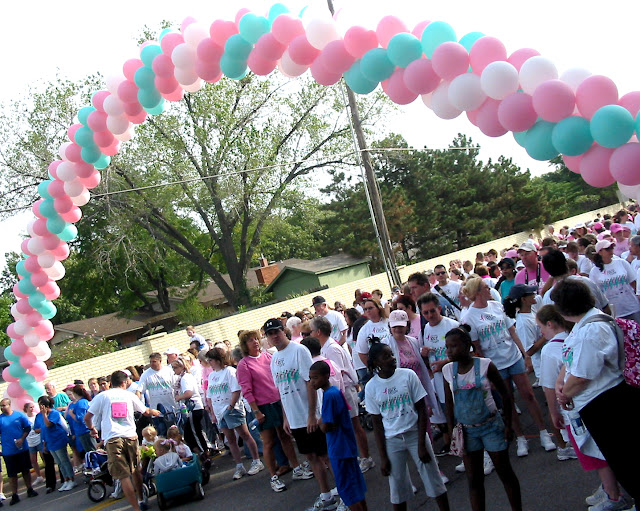 last weekend my team, participated in wichita's race for the cure. wanting to have a little fun with the team name this year i opted for "the septemberists", which i thought, not only played tribute to a great band, the month of the race, but also provided opportunity for some creativity with team uniforms.

having some discussion's with my team members about possible outfits, it quickly become apparent that the "vintage-tweed-look" i was hoping for, might not work for a race. we eventually narrowed it down to headbands and goofy socks. 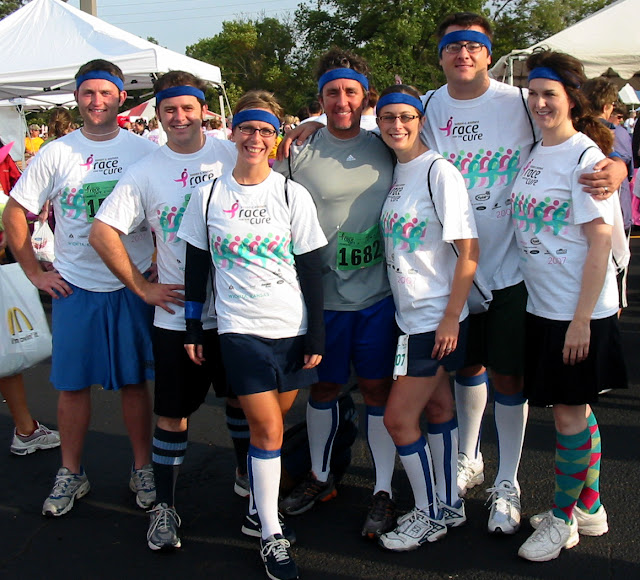 we got there early saturday morning and prepared for our race, a 5k. a distance that had not previously been in my vocabulary. however, i had done some training, and felt i could do it, in slightly better form then that of, michael scott from nbc's "the office". i took a good 15 minuets to stretch and prepare my mind emotionally.

figuring a person can walk a mile in 15 minuets, i was hoping to finish under 45. i put 45 minutes worth of music on my "race_4_da_cure" play list on my ipod, and entered the line. the gun went off and i started my 3.1 mile trek. for the first part of the race, i just followed the herd and kept up. i was doing relatively well, up until the halfway point, where they were handing out water. as i approached the table of tiny cups, i was so excited! i thought to myself,

"wow, i'm actually in a race, long enough for people to hand out water, sweet!"

wanting to pull off a move like runner's do in the movies, i grabbed a cup up, as professionally as i could. as i snatched it up, some water splashed up and glistened in the early morning sun almost in what appeared to be slow motion. i kept my pace, opened my mouth and poured the water in....and immediately coughed most of it back up as most of it got into my lungs. not a pretty sight. obviously something i'll have to work on. 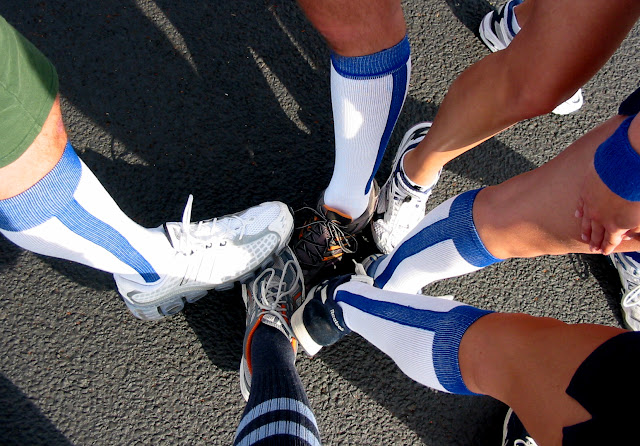 alright, i'll admit it.....i wasn't able to run the entire distance, i took a break in the middle, but upon hearing that we had 3/4 of a mile left from the other runners, i picked it up and finished the race, just back from a few mothers with strollers that i was drafting behind, but i am happy to admit that i still had two full songs left on the play list....you do the math.

all in all, i had a great time, and i want to thank everyone and anyone that participated for their support. the whole event is bitter sweet, and i was reminded in more ways then one that day, about the obstacles that are presented to us, in this life, and how no one is a failure that faces them head on and gives it their all.
Posted by ercwttmn at 10/01/2007 10:20:00 PM 1 comment: