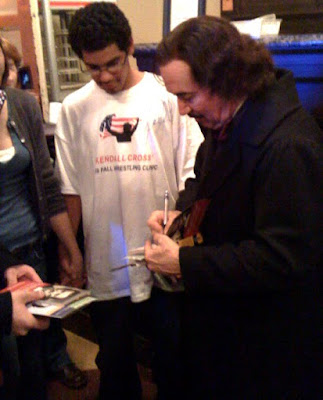 i make no attempt to hide the fact, that for the better part of my life, i avoided reading, writing, and spelling like the swine flu. only recently have i discovered an appreciation for these arts. that being said, any literary discovery i make, some of which should have happened around the fifth grade, i enjoy sharing. please humor me.

the other week, i literally stumbled into a reading event. i was trying to figure out how to make the most of a saturday night, when my friend karen called and informed me, she was downtown at the orpheum about to listen to an edgar allan poe interpreter. hearing my hesitation to attend a reading of this poet, she mentioned it was free, to which i quickly began walking to the theater. upon entering and after stumbling on the front steps, i was handed a pamphlet and a free book of edgar allan poe's poems! i was informed by the free-book-hander-outer, i was taking part in the national endowments for the arts "big read" program, with the goal being to restore reading back to the center of american culture. there's no way she could have realized it, but getting me in the door should be considered a huge success for the program.

walking down the isles, i found the crowd to be a mixture of older literary types, teen aged emo hipsters, and a handful of people obviously here to receive extra credit in a reading class. i knew them well, i only received the grades i did in my high school reading class by attending every book signing barnes and noble offered that semester. i found a seat next to my friend and awaited the performance. the lights dimmed and from behind the curtain appeared david keltz, a well known poe interpreter dressed like poe himself. he spoke as the author, discussing events in his life, and reasons behind the poems he wrote. they were dark and morbid, but somehow...still very beautiful. i recognized "the cask of amontillado" and "the tell-tale heart", only because it had been required reading in high school, but that night, i found myself slowly getting into the readings, not because i had to, but rather because i wanted to.

with each story poe explained more about his life and poetry. to paraphrase badly from what i remember, poe wanted to fill his poems with emotion, and he felt there was no emotion more complex than those surrounding death, especially of a loved one. to turn those mix of emotions into poetry is one of the most beautiful things a writer can do.

he than started a reading of "annabel lee".

something magical happened. as he read "annable lee" i made a discovery! themes of love, death, deception, murder, suicide, and revenge all put into beautiful verse, the name annabel, a kingdom by the sea! these were all decemberists songs! from that instant of realization i couldn't stop making connections, and i hung on every word.

i have no idea how much of a fan colin meloy is of poe, but these two lyricists share a lot of the same themes. in meloy's own music catalog, he mentions the name ann, or annabel several times, even having a song titled "annabelle leigh". in"oceanside" a character named annabel is seen reclining by the ocean, creating a similar image to poe's character. poe also uses the phrase, "kingdom by the sea", which is almost the same way meloy describes l.a. in "los angeles, i'm yours".

i'm very aware this isn't a new discovery, as anyone familiar with poe would have noticed this upon hearing any decemberists song. the shock is also less, knowing meloy majored in creative writing and would be very familiar with stories of the macabre and other dark romanticism works, of which poe wrtoe in. meloy is simply bringing this genre to the forefront of culture again, only this time with a catchy indie-folk beat behind it...which i'm eternally grateful for.

before i go, here is poe's "annabel lee" which to me, is just as beautiful as my favorite decemberists song.

It was many and many a year ago,
In a kingdom by the sea,
That a maiden there lived whom you may know
By the name of Annabel Lee;
And this maiden she lived with no other thought
Than to love and be loved by me.

And this was the reason that, long ago,
In this kingdom by the sea,
A wind blew out of a cloud, chilling
My beautiful Annabel Lee;

So that her highborn kinsman came
And bore her away from me,
To shut her up in a sepulcher
In this kingdom by the sea.

The angels, not half so happy in heaven,
Went envying her and me
Yes! that was the reason
(as all men know, In this kingdom by the sea)
That the wind came out of the cloud by night,
Chilling and killing my Annabel Lee.

But our love was stronger by far than the love
Of those who were older than we
Of many far wiser than we
And neither the angels in heaven above,
Nor the demons down under the sea,
Can ever dissever my soul from the soul
Of the beautiful Annabel Lee.

For the moon never beams without bringing me dreams
Of the beautiful Annabel Lee;
And the stars never rise but I feel the bright eyes
Of the beautiful Annabel Lee;
And so, all the night-tide, I lie down by the side
Of my darling, my darling, my life and my bride,
In the sepulcher there by the sea,
In her tomb by the sounding sea. 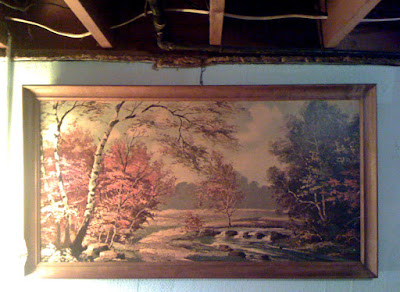 with my grandmother celebrating a milestone birthday the other week, the whole family made a trip to western kansas to celebrate it with her. after meeting up with everyone and enjoying a late lunch, we ended up at my grandma's house to chat. now, ever since i can remember, i loved venturing down into my grandparents basement. when i was younger, i was on a constant search for my dad's childhood baseball cards, which he swore were down there, somewhere. now, as an adult, i go down there just to marvel at the mid century relics still stored down there, paintings, lights, amber colored screens, and radios from another era. i'm sure most grandma's basements are like this, but it takes on a whole new level of amazement when it's from your family, items sometimes identifiable in old family photos.

however this last trip down put things in perspective a bit. like any good museum, the collection is constantly growing and changing, and for the first time, i started noticing items i have memories of, back when they were on the main level. most notably the table i use to eat breakfast at while i watched grandpa play solitaire. items, that to my cousin's kids (the youngest generation in the family), look just as ancient as the old frigidaire did to me.

...and yes, i did look for the baseball cards, and no, i still haven't found them. 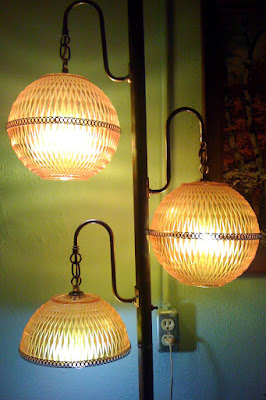 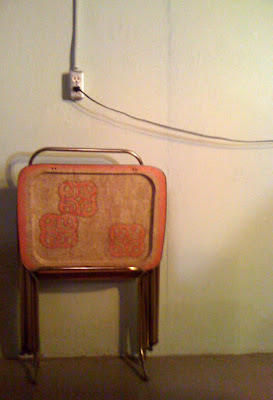 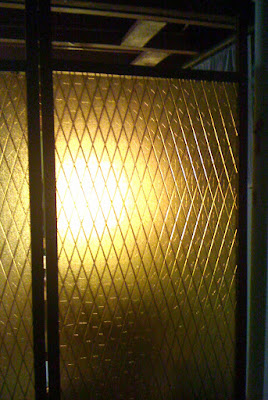 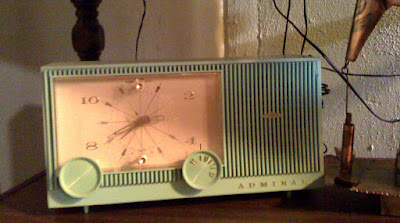 the [key] to any acting career 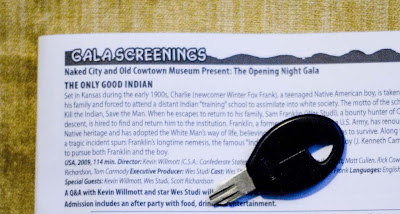 if you've been reading this blog for a while, you may or may not remember some years ago, i had the opportunity to be an extra in an independent film shooting in wichita. you may or may not also remember the story of how i was promoted from just an extra to cashier #2!

well...after years of waiting, the film finally made it's wichita debut the other week! it was the opening movie for the tallgrass film festival held every fall. over the years i've kept in touch with a handful of the other extras. there's something to be said about a group of strangers stuck in a room together with nothing to do for ten hours but play cards...it bonds you. anyway, upon hearing it was showing, we all bought tickets so we could enjoy the film together. while the movie played, we would point out when we saw each other in the background and marvel at ourselves on the big screen. i, of course, anxiously waited for the cashier#2 scene in the hardware store. halfway into the movie, it came. the lead actor walked into the store and approached the cash register. my heart pounded...this was it...my big screen debut! this would be my "brad-pitt-in-thelma-and-louise" moment. i waited for the camera to change angles, wondering the whole time how i would look! i waited...and waited..and waited. the angle never changed. the lead actor tossed some change on the counter, picked up a package off screen, and than walked out.

my big moment had ended up on some editing room floor. as the next scene took place, i was left wondering if my expression had not been right? was my motivation wrong? had i not conveyed the feeling of being a cashier in the early 1900's. did my face not transmit to the audience how important this package was? did my character not further the plot enough? the obvious answer was, no, it did not.

my disappointment didn't last long as i found i had made it into a few background shots, for a total screen time of about half a second. even with minimal face time, the whole experience was worth it. after the film, the director kevin willmott and lead actor wes studi stayed to answer questions before everyone headed to the opening night gala. after the event, my friends and i went out to eat and continued discussing films and future auditions. the night ended with me feeling very full of myself, ready to move to hollywood. as i went to start my truck, trying to figure out how to get ari gold as my agent and who might fill out the rest of my entourage, the key broke off in the ignition, rendering my truck unable to start. i walked home that night, alone, in the dark, with thoughts of my own series quickly vanishing. i called a locksmith the next day. he tinkered around and eventually got the other half of the key out. as i looked at the bill he handed me, which, being on a weekend, was extremely high, the total was a very familiar number.

it was, almost to the dollar, the same amount i had been paid for two days of work as an extra.


this kind of thing never happens to ted danson. 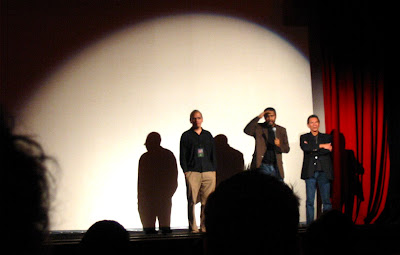