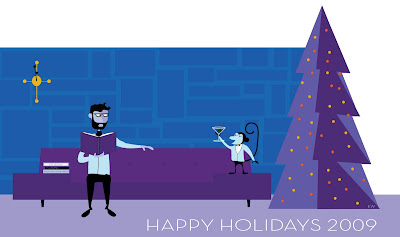 wishing anyone and everyone that may stop by this page a wonderful holiday season and a happy new year!
Posted by ercwttmn at 12/29/2009 06:06:00 PM 1 comment: Links to this post 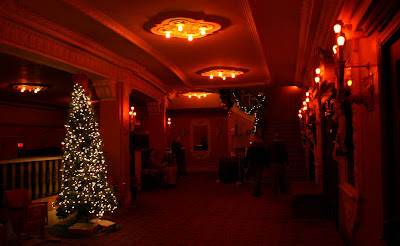 i'm not exactly sure how many times you have to repeat an event in order for it to become a tradition, but i feel i may be on the verge of one. last week the orpheum theater had a showing of one of my all time favorite christmas movies "a christmas story". now, i know very well that come christmas, i'll have my fill of this movie when tbs runs it's annual "24 hours of a christmas story", but there was something exciting about seeing this classic on the big screen, i couldn't pass up. so, just like last year, my friends and i gathered to enjoy a cup of coffee before hand and than walked to the theater. leaving the frigid temperature of the sidewalk behind us we entered the lobby and found it decorated for the holidays. making our way into the theater we found the place filled with people! not finding enough seats on the floor to accommodate all of us, we headed to the balcony. as the movie played it was obvious most of the audience had seen this movie no less than 2,000 times before, as most of the funny parts got laughs before they happened. however i'd like to think there were a few "newbies" in the crowd, a few lucky individuals seeing it for the first time on the big screen.

this movie is wonderful on so many levels, which is no doubt the reason it' s a classic. first of all, since it came out in the early 80's, it's always been a staple in my christmas experience. i remember discussing the "frozen pole" scene with friends during recess, wondering if one's tongue really would get stuck. i also had "that" christmas during my youth, when all i wanted was a b.b gun, hearing the famous "you'll shoot your eye out" line over and over. being older i now appreciate different aspects of the film. how the very simple story line developed into such a full story with the use of creative and rich narration. how the fairy tale, norman rockwell-esque setting plays backdrop to the more familiar family settings we all know, such as a father cussing at a broken furnace, but most of all, i enjoy how the movie captures the timeless feeling of what it's like to be a kid during christmas.

leaving the theater with my friends that night, and walking the streets of downtown, i couldn't help but get a little sentimental norman rockwell-esque christmas feeling myself. spontaneously running into, and catching up with some other friends, who had come out to enjoy the movie as well, on the street, only enhanced this feeling.

so, this whole, downtown-christmas-coffee-movie-at-the-orpheum-thing, may not be a tradition yet, but i'm thinking it needs to be. maybe next year, i'll make it official. 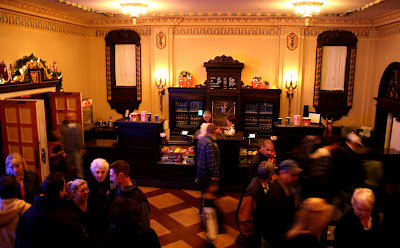 [buying] under the influence 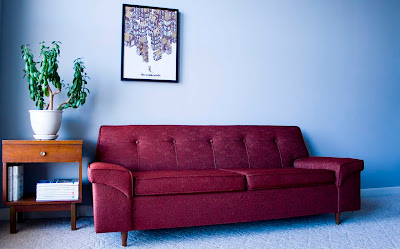 i'd like to send a warning out to anyone reading this. please, please, do not, under any circumstance, peruse craigslist while under the influence of nyquil.

last week i came down with a little 24 hour bug/flu/cold. feeling it coming on, i left work early, went home and immediately took a shot of that sweet, sweet green nectar of the "get some rest so you can feel better" gods, named nyquil, and fell asleep. waking later that evening, before the full effects of the nyquil had worn off, i decided to surf the interwebs for a bit. i made the usual rounds... local news, flickr, facebook, blogs, hulu...but eventually wondered into, what i feel is, the "garage sale" neighborhood of the internet...craigslist. not nearly as classy or cute as the artsy neighborhood of etsy. no, here in craigslist you got to be careful. lots of weird characters around these parts. you gotta keep your wits about you, this is not a place to enter "hopped up" on anything...let alone nyquil.

the problem, i quickly discovered, is that everything looks amazing! everything's a deal. i had no idea what i would do with "a beautiful poem in a frame" but it sounds nice, and it's free! fill dirt? i don't' even have a yard, but there's three free dump trucks of it just waiting to be nabbed! how could you turn that down. luckily i had some sense about me, that is until i came across the listing of a "mid-century modern couch" before seeing the picture, i was in love. reading the description only made me fall deeper. thoughts like "you already have a couch", "how will you get it in your apartment?", and "what are you going to do with your old couch?" never entered my head. how could they? my mind was busy entertaining visions of me chatting it up with betty draper on my newly acquired couch, during the chirstmas party she would no doubt want to host in my apartment this year. i e-mailed the seller, said i would take it, and went to bed.

i awoke the next morning feeling much better. i checked my e-mail and found a letter from someone i didn't know, telling me what time i could pick up a couch.

reading further down, and finding my original letter, i began to remember a few fuzzy details from the night before. i decided to go look at it, but only after a friend said he could go with me. craigslist can be a scary place to exchange anything, and i wanted back up. luckily for me the sellers were incredibly nice, and the couch was in great shape. they turned out to be a young couple who were huge "mid-century" fans, and are constantly finding and selling pieces. we loaded the couch in the truck, and hauled it into the apartment.

now, although everything worked out fine, and i'm thrilled about the amazing deal i was able to land, what scares me is the realization that i was one, sniffling, sneezing, coughing, aching, fever, nyquil-dazed e-mail away from having 3 tons of fill dirt in my living room.