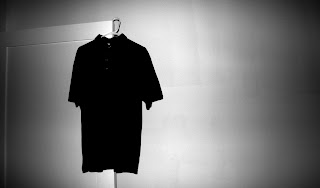 years ago, i lost a shirt....well...not so much lost as misplaced.

a few years back i took a trip to chicago. while i was there, i stayed with some friends. somewhere, somehow during the trip, the shirt was misplaced and i traveled back home without it safety in my bag. unpacking at home, i realized what had happened. i panicked a bit, ok, so i panicked a lot. let me explain.

this wasn't just your average, "run of the mill shirt", this was my black-polo-casual-short-sleeve-dress-shirt! it was what you'd call a varsity player, and it wasn't just at that level on one team, but two of the teams found in my closet!

it was one of the team captains on the "work shirt" varsity team. meaning it was one of three shirts i could constantly count on to always look good whilst working. from a day of drafting, or meeting with clients, it was the perfect shirt. comfortable and cozy! it could do no wrong! i loved it. making it even more irreplaceable, it was also a "starter" in my "going-out-on-the-weekends-hanging-out-with-friends" team! at the bar, drinking coffee, taking pictures, visiting the library, or eating out at a restaurant! this shirt could do it all! he could also work with anyone i might pair him up with! dress pants, khaki's, jeans or cargo shorts! this shirt would make it work!
this may begin to give you an idea of the panic i was in.

not all was lost though, a few days later, my chicago friend emailed me, letting me know that my stare player had been found .giving him my address, he'd have it back to me just as fast as the mail could deliver it....or so i thought.
weeks went by, and still no shirt. my friend had it packaged and ready to go, he just hadn't been able to get to the post office. eventually he decided just to wait until christmas when he would be traveling back to kansas city to bring it with him. christmas came, he forgot it.

skipping ahead a one year, he remembered to bring in down the next christmas, what he did forget however, was to take it out of the car which was eventually driven to the great city of denver by his parents. after this, the details get fuzzy, but i believe that while in denver it was handed off to his brother, who brought it back to kansas city, where it's been the past five months. now that i've been enjoying a little extended working vacation in kansas city, last week, my all-star and i were finally reunited. putting it on, it was like we had never parted.

unfortunately for him, the "work clothes" league has been on hold for the last month, so he hasn't been able to take the field yet, but as soon as the season opens again, i'm sure he'll be back to the top of the roster.