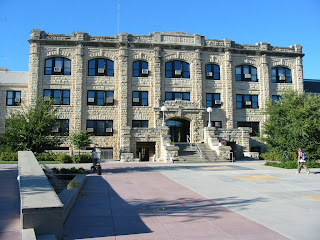 a few days ago, some friends and i were enjoying dinner. the night was filled with the usual banter...nothing out of the ordinary. that was until a small mob of people rushed in, armed with banners, balloons, and cake! within moments the place was converted into a surprise party for our waitress! as they hung the banner, it became apparent the reason for the festivities was to celebrate our waitress's tenth year of working there.

the whole place celebrated, the manager gave a speech thanking her for all her hard work over the years, friends toasted, people applauded, the camera guy cried....it was all very cool.

as the place simmered back down, we personally congratulated our waitress, and went back to our socializing. naturally, our discussion found it's way to what we were all doing ten years ago. my initial thought was, "wow, ten years! that's such a long time!" however after doing some quick math, i realized ten years ago was only 1997! how could this be? where did the time go.

how did the time pass so quickly? did seaton hall somehow compress time? does it have the required critical mass to produce the gravitational pull necessary to warp the space time continuum? could it be the all nighters? the caffeine? the stress?

i have a theory. as hard working little architecture students, we all knew that on the average, the four days before a project felt like one day. some more, rarely less. therefore we can then say that four days to the average college student equals one day for us. being extremely generic and keeping simple math, four years becomes one. 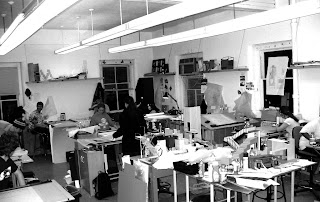 it's almost as if upon entering the college of architecture you entered a coma.....time passes...you graduate, you wake up, and suddenly it's five to seven years later!

now to the point. i don't know if it's because it's august and school's starting again, or if it's because four days, really do feel like four days. but looking back at this coma, i can't help but think, what a wonderful environment it was to be [stuck] in. i'm not just talking about manhattan, although i fully believe it's one of the most beautiful cities in kansas, but rather the college atmosphere. the energy, the life, the experiences, the wonder, the people........

now, i'm not saying that life isn't exciting now. there are new goals, aspirations, experiences, adventures... it just seems like it's on a different time....real time. 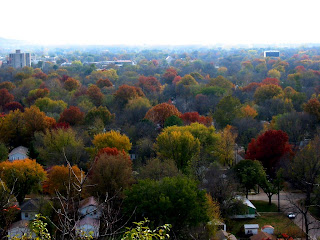 a [change] in professions?

a few weeks ago, i read that a movie crew would be filming in wichita, using our old cowtown museum as the set, and they would be having open auditions for extras. not having terribly too much to do that particular saturday, i drove to the auditions. after standing in line for a couple of hours, they took my picture and sent me on my way.

right about the time this whole ordeal slipped my mind, i received a call asking if i would be available for two days of filming! without thinking of any responsibilities i may have at work that week, i agreed. 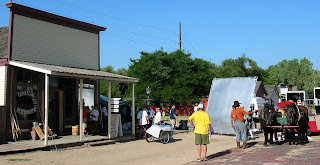 the movie is titled "the only good indian", and is centered around a young indian boy, forced into the boarding school process in the early 1900's.

i arrived on set last friday at 6:30 a.m., and got into wardrobe. after hours of waiting along with other extras, i was called to the set, where i was instructed to walk down the street. after 10 takes, i was sent back to the "extras" lounge. after a few more hours of waiting and a free lunch, i was called to the set again, this time, the general store. waiting to be an extra in the store they looked at me and said.

i went to wardrobe, and received a "cashier's" outfit, and then was told to go to "make-up." at make-up i was told that i would have to shave my ever present five o'clock shadow to look more "cashiery". after shaving, getting my hair slicked back, and adorned with make-up, i made it back to the general store. being placed behind the camera, a producer came up to me and asked if i had any idea of what was going on in the scene.

he then instructed me that i was to take a package over the counter, smile, nod, and then walk out of frame.

"i think i can do that" i replied.

the camera and lights were set, sound was on, and they were about to roll, when the director peered through the camera and saw me looking like i had just run a 5k, sweating in the 103 degree heat.

"can i get a pat down on an actor?" he yelled, to which the on-set make up artist patted me down with a dry cloth.

i only did my scene two times, but in those two times, i really feel i stretched my wings as an actor and explored my creative space. i mean, how can i best convey to the audience that i'm really receiving this package? i dug deep, and brought up a lot of different feelings and emotions i had felt with various packages i had received in my own life.

i hope it worked.

alfred hitchock once said that "actors were cattle", and it definitely felt that way. we were all herded into a room, and guarded at the door so we wouldn't wonder. however instead of grazing on grass, we hovered around a large refreshment table filled with countless goodies, and beverages.

although it was a lot of "hurry up and wait," and of the two days of filming, i probably made it on camera a total of twenty seconds, it was worth it. the whole experience was educational and fascinating, from seeing the preparation that goes into a scene, to the choreography of movement, to talking and getting to know the other extras.

i'm not sure if i'm ready to give up the architecture gig for professional"background artist", but you never know, i mean in just one day i went from towns-person #12 to general store cashier #2! 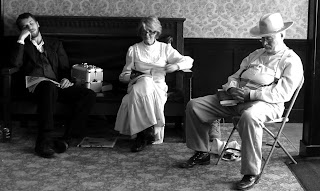 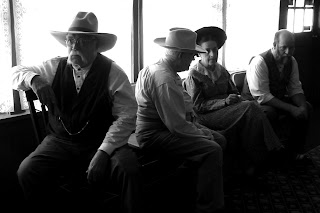