a [part] of the community

a few months ago i entered a design competition.  it was to redesign an existing park to help it be more apart of the community.  the funny thing was, i didn't enter the competition to win it. 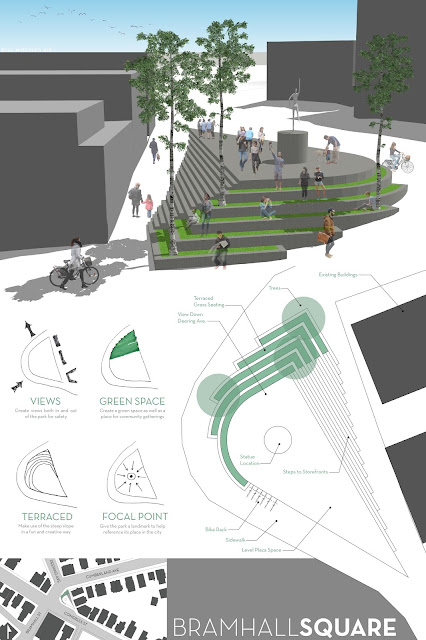 alright, that may not be entirely true, there was a little, tiny part of me that wanted to win, but it wasn't the main reason.  there were several other reasons why i wanted to participate.

first of all, i wanted to shake off some rust. unlike in school, in the professional world, very rarely do you get a small project, where you can basically do anything you want. also, i cant remember the last time i had to convey the entire idea of a project on one board.  most of my working life consists of putting together large instruction books for buildings which other people construct.  i was excited to get back to my "studio"roots and design a project and have to convey the idea armed only with presentation skills and a board.  since college, i've had the honor to attend several college "crits" where i comment on students designs but sometimes would also suggest to them better ways to present or show their projects.  i was excited to "put my money where my mouth is" as it were and see if i could present my entire idea in a simple and graphically pleasing way.  also board design.  i love looking at project boards and judging them.  some boards have a ton of imagery and wording and still tell me nothing, while others can minimally put together a few drawings and an image and it tells me everything.  i was very excited to dust off the graphic/board layout skills and see if i've learned anything.

next, i wanted to understand my new home better.  i've always believed architects should know their city.  coming to the east coast, there's a whole lot of history to catch up on.  nothing educates an architect more than throwing themselves into a project.  i'm now aware of the history of this site, the importance, the views, the grade, the transportation patterns and local business's in the area. it's only a small piece of town, but i feel i know it better.

lastly, i wanted to feel a part of the architecture community.  i was excited because i knew at the presentations i'd have a chance to meet other architects, landscape architects, artists and designers i wouldn't normally run into.  although i didn't officially meet many people that night, in the months since, i've encountered several people who have asked, "hey didn't you have an entry in the bramhall design competition?"  this usually turns into a great introductory meeting, and as geeky as it is, i've added several new colleagues to my "linked in" network.  which we all know is basically a digital first date in the professional world.

so much like this competition was designed to take an old, tired piece of land and freshen it up and make it feel more apart of the community; participating in the competition has done the same for me.