[barack] where i come from 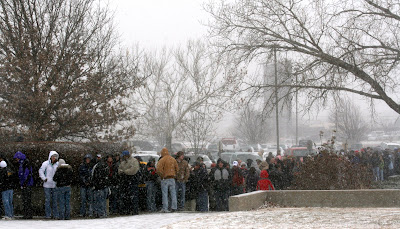 i've never been real boisterous about my political views, and don't intend to now. when it comes down to it, i'm a proud kansan, and always get excited when politics from the federal level, travel a few back roads and find it's way to this state.

i also love seeing our elected officials speak live. two years ago, i had the chance to hear president bush at kansas state. i had friends say, "you couldn't pay me to listen to him!" i didn't care...i went. well today i had the chance to hear democratic presidential candidate, barack obama speak. once again i had friends that said, "you couldn't pay me to hear that man speak!". i still don't care, i went. i'd like to believe that if any candidate would have come to kansas to speak, i would have made time to attend.....well....almost any candidate.

i read that mr. obama would be speaking in el dorado, the birth place of his grandfather, which is just about 30 minutes from wichita. he would also be the first democratic candidate to visit the sunflower state since 1960! it's was also kansas day! how could i miss this?

i convinced a co-worker to attend the speech with me. he and i arrived in el dorado about an hour before the doors were suppose to open, and found ourselves, in a line, about 150 yards from the door in near zero degree wind chill! i kept reminding him how wonderfully old fashioned this was to stand in line, in the weather, to see a candidate speak! about 45 minutes into the wait, this wasn't entertaining to him anymore. during our wait we were told that considering our place in line, we'd probably end up in the overflow rooms and have to watch it on t.v.

as we arrived closer to the door, we ended up being one of the last groups to be allowed entrance into the gym, this was also the time they opened up the floor seating. we found ourselves right behind the reserved seating, about 15 feet from the podium!

in the beginning, mr. obama's speech focused on his grandparents kansas upbringing, and how they fought and forged out a way of life in america that seems to be slipping. it then shifted into what actions and changes he would make, if elected president which at various points caused the whole crowd to stand and cheer. the highlight of the event was when our own governor, kathleen sebelius, came out and publicly gave her endorsement of mr obama.

just as before with president bush, i'm glad i went and have no regrets taking a few hours off work to attend the event. i do wish however that i would have been better prepared to stand in the blizzard for an hour, as i think i'm now sick..... 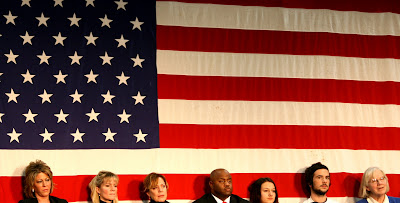 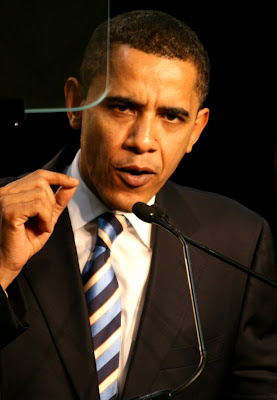 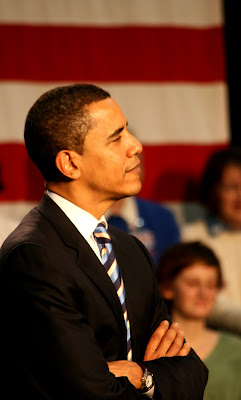 hang your [vintage] coat up 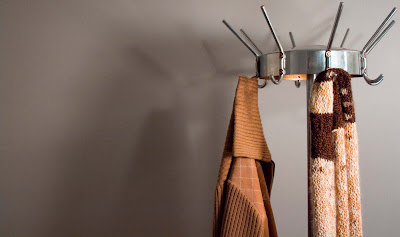 
what can i say? i just love having the options there, so that no matter what temperature/occasion situation may present itself, i'll have the perfect coat. this obsession however, coupled with my lack of closet space, led to the problem of jackets scattered throughout my apartment.

i've been in the market for a coat tree for a while now.

since moving back to wichita and rediscovering down town, i find myself walking the sidewalks, looking through windows once packed with the latest in fashion and merchandise, but now only provide views into the interiors of long forgotten structures.

one day, while peering into one such building, through a storefront, that at one time must have been a barber shop, i spotted it! the most perfect coat tree i had ever seen! there, on the corner of douglas and market, it stood, inside the vestibule! eight hooks! chrome! vintage! long! and lean! i was in love, but alas, it was not to be, as our love was guarded by two locked doors and a chain.

for over a year, i've scavenged local thrift stores and antique malls looking for something similar, to take my mind off of it. i've included friends and family in this search, but to no avail, nothing presented itself.

now, i didn't pursue it quite as hard as ahab...probably because the coat tree hadn't taken my leg during battle at sea...i just thought it looked cool.

this past thanksgiving, when asked what i wanted for christmas, almost jokingly i said,

"the coat tree on douglas and market."

i had no idea the chain of events that were about to begin.

i met the owner at the building last week. we talked briefly about development downtown, and future plans for the building. business cards were exchanged, and i rode home with a "white whale" in the back of my truck.

so as promised, here are the pictures, and the post, commending the efforts of those involved. although cell phones replaced harpoons in this battle, the feat was still as intense.....well, as intense as it gets in wichita. 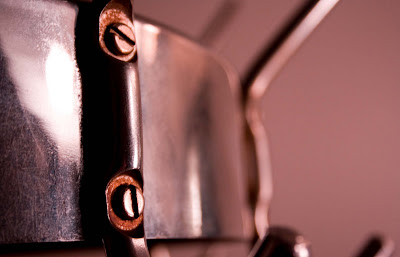 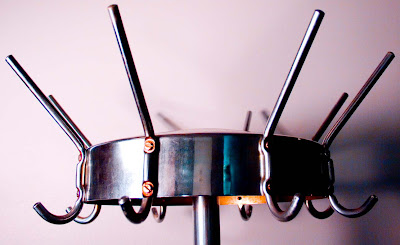 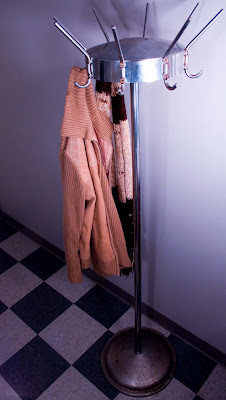 looking back, i don't believe there is anything more i can say about my feelings on photography, that i haven't already said, instead, my thoughts tonight are more on creating this post.

this process, i've generated for myself, of going back through labeled folders, and finding ten photos representing the year, is very therapeutic. what events sculpted 2007? what lessons this year, became structure, helping support new ideas? what teachings have allowed me to continue to grow as a person? what feelings and emotions, became immersed on digital film? what memories are now held only in my mind?

looking back at this [pictorial cliff note] version of my life, i think this was a year of finding niches. it's almost like, life is a huge peg board, and your goal is to find where your individual shape fits in. now, i'm not sure if i've found the perfect fit yet, but trying out different niches, tends to lead to a few stories, and couple interesting photos. 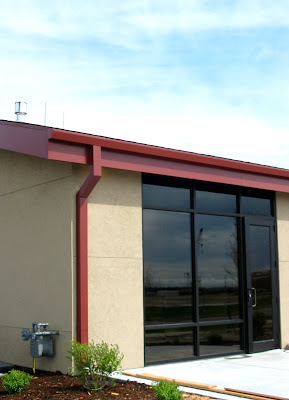 not artistic at all, but this is the first project i helped complete since starting my job. this was taken during a site inspection. i noticed the stucco joints didn't line up at the corner! after pointing this out, i went back and looked at the drawings. sure enough they had built it exactly the way i had drawn it.

my saving grace was the placement of the downspout. i'm also hoping the landscaping does rather well, and grows fast.

this is now a huge inside joke in our office.... 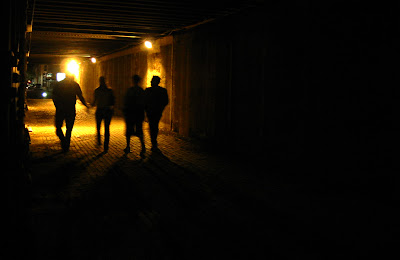 the last friday on every month, wichita hosts [final friday's]. a night where all the galleries open up for public viewing. by far one of the best things downtown wichita has going for it. this picture was taken as my friends and i cross-crossed around old town looking at art. 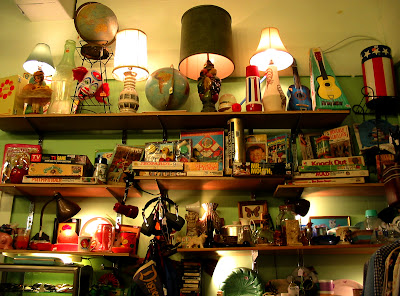 this was taken during a weekend trip to austin texas to visit a friend. the whole city had this amazing vibe. urban...hip...vintage...country.... very unique. this photo was taken while perusing the vintage thrift stores, and i thought it did a great job of capturing all of that, on just a few shelves. 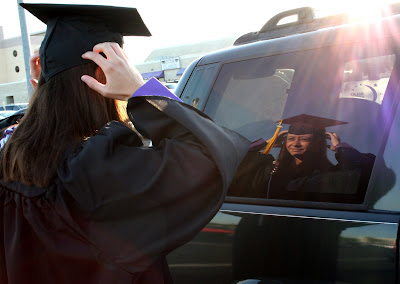 i have no idea when my little sister will seem grown up to me...maybe never.... 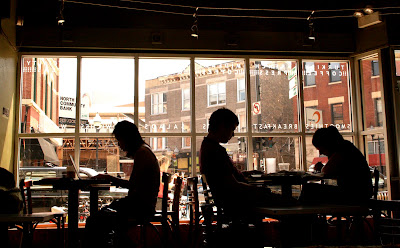 i took a few days off of work this summer, and traveled with some friends to chicago. it was a relaxing way to spend a few days off. what did i do from my break from work you may ask? drink coffee and look at architecture!

also, about a half an hour after this photo was taken i had a celebrity run in. i got to chat with mike jorgenson from the band wilco. and when i say "chat" i really mean, i said, "hey, i love the new album", to which he said, "thanks". 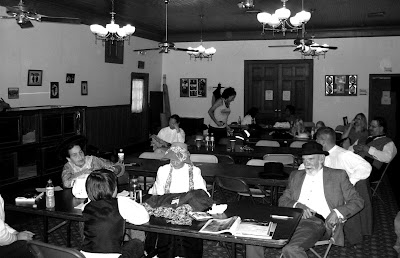 i somehow squeaked into being an extra in a movie that was filming here in wichita. it was two ten hours days of shooting, to which i got in front of the camera for 15 seconds. my biggest claim to fame was being promoted to "cashier number 2". we'll see if i make the cut.

by far the best outcome of the whole event was meeting and staying in touch with a number of new people. the man in the lower right of the photo, new keeps me up-dated, via e-mail, on any local, "film-like" activity taking place in wichita, which is very enjoyable. 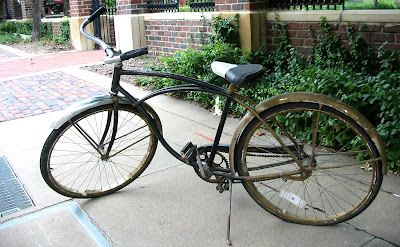 i spent most of this summer looking for a vintage bike to fix up and start riding. an ad in the local paper, was brought to my attention, and i went during my lunch break to check it out. i came back to the office wheeling in a 1963 schwinn. my coworkers thought i was crazy, but what's new. i bought a new pair of white walls and cleaned the chrome. at times, it's my most reliable ride. 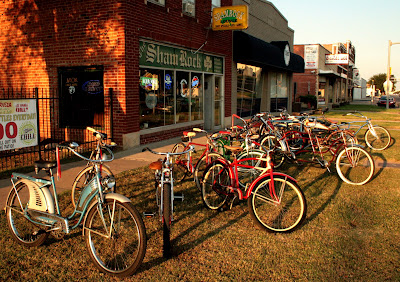 alright, so a big reason for the bike, was so that i could join a vintage bike club that cruises wichita on thursday nights. i had seen a couple guys riding around and asked what they were doing. after getting my ride....well....rideable, i cruised down and joined them one thursday. i wasn't sure if there would be some sort of initiation i had to go through, but apparently just a love of bikes gets you in. i rode with them the rest of summer and into the fall, getting tips, and even a few original parts to swap out my "non-factory" parts with. 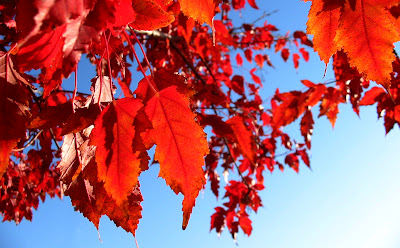 i added this photo, because i believe autumn to be the most beautiful season in kansas. i'm also really happy with the colors and composition. i'm not going to mention that this was part of an on-line project assigned by the wichita flikr group that meets the first saturday of every month of which i attend.... 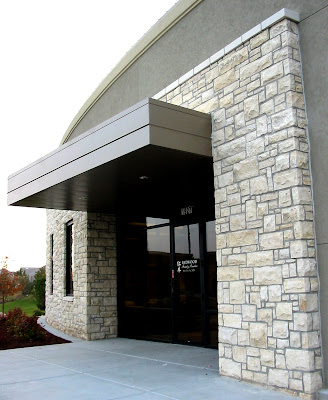 i added this photo, because this project consumed most of my working life in 2007. this was my first try at project managing, well, at least i think it was, they might have fixed my mistakes after i went home each night....

anyway, it's not going to win any awards by any means, but i'm very proud of it. some things came together very nicely on it, and if you happen to take a walk around it, you can rest assure all the stucco joints line up.
Posted by ercwttmn at 1/07/2008 11:38:00 PM 2 comments: