i was just getting settled into the life of an [urbanite], well at least as much as wichita will allow. i enjoy my morning coffee and walking to work with my murse [man-purse] across my chest.

i try to use my truck as little as possible, however, every once in awhile, i'll need to run an errand that is beyond walking distance. so tonight, needing to run such an errand, i approached my truck, where it had been parked since sunday. i noticed a little more busted glass on my seat then i usually like to see. yup, my truck had been broken into. i went through the natural colombo sequence, assessing anything stolen, looking for clues, or any other hints that might lead to a suspect. to my surprise nothing was stolen, not even the radio. actually the most expensive thing i keep in my car is the spare change in the ashtray. i'm hoping that the thief, after spending a few seconds ripping at my dash and radio, realized that it wasn't really worth the effort and left, leaving just a mess of wires and glass behind. i naturally reported it to the police, where as they asked if anything of value had been stolen, i wanted to say [some creedence tapes] but held myself back. she then asked when it had happened. i responded sometime between the hours of sunday night, and wednesday night. to which she said, "you leave your car parked downtown for three nights!" i wanted to get on my soapbox and inform her that it had been parked that long because i walk to work, and actually how everyone should walk more, however, i decided to just to finish the report. 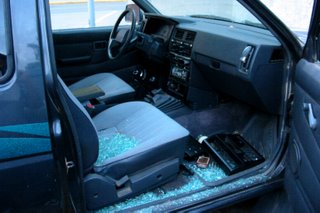 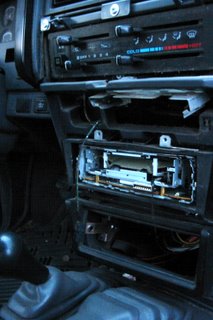 what is it about your first year on your own, that requires your car get broken into? i've known several people that have had this happen months out of college. it's almost like there's some sort of sticker on our car we don't know about. [i'm on my own now, please break in!]

i'm not really upset, life will always throw you curves, it's how you handle it that's important. i'm grateful that it's only an inconvenience. i will, however, have to buy a new window, and i'm now convinced that i should probably shell out the extra bucks to park in the garage.
Posted by ercwttmn at 9/27/2006 09:18:00 PM 4 comments: Links to this post

[away] from the desk

like every other city, wichita is trying to revive it's downtown. this week, our firm took a little [field trip] to visit a few of the buildings that make it up. i was so excited for this little adventure, i almost packed a sack lunch with a dr. pepper wrapped in foil.

i relish any chance to leave the office. i understand the majority of our work does have to take place in the confines of an office, but it's great to get out. i believe that most of my friends, who are also architects, would agree, that we got into this profession because we love buildings. we are fascinated at the space one can create by constructing a few walls, and on site you become immersed in it. most of the buildings in the downtown area are now just empty shells, only hinting at their former glory, but somehow they still hold inspiration. downtown will never get back to the feel and energy it had 50 years ago, our lifestyles, with our cable television and drive thru's, will never allow that to happen, but it is great to see these former temples of retail and business find new life. 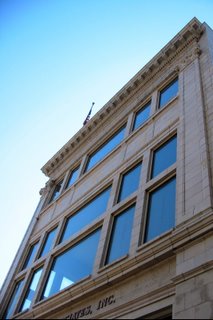 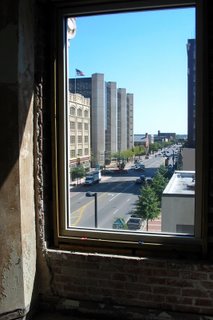 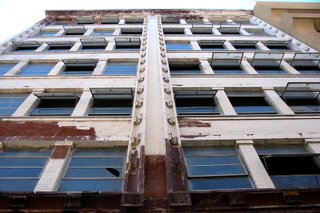 going along with the theme of this post, i set up my answering machine at work. i've been starting to get my own calls, and thought that if by some miracle i happen to be away from my desk, i'd like to give the caller the option of voice mail. sure enough the next day i had my first message. it wasn't anything too important, in fact i've been noticing that i seem to talk with people at the same level on the corporate ladder as me, only in different fields, as i've been conversing with the [cad monkey] over at an engineering firm. i know that soon, i'll loath that little blinking light, but for now, if you need me i'll be at extension 208.
Posted by ercwttmn at 9/21/2006 07:19:00 PM 1 comment: Links to this post

former [intern architect] about to become the masters champion

september and october are the best months to be in kansas. those few precious weeks that you can be outdoors without being at the mercy of the heat or bitter cold, and how better to spend those weeks then golfing. 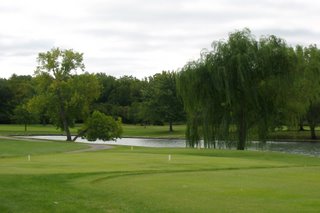 everyone in my office loves golf, and today was the annual aia golf tournament. in an office of six people this of course means the office shuts down, and we play golf. being the "new guy" they were anxious to see if they had some new talent waiting to surprise the other firms with. however my years on the junior varsity team did not pay off. i would have had better luck playing blindfolded with a shovel. our saving grace however was the general contractor we recruited for our team, keeping us from coming in last. however the day wasn't a total bust.

there is a reason golf is compared to life so much. as mentioned, i had a terrible round. all day i was hitting the water, sandtraps, and once, the refreshment cart. however on one particular par three, i landed the ball seven feet from the pin, giving me one of the best shots in my life, making all the other disappointing shots disappear. just as in life, years of trial, error and frustration, seem to disappear the moment everything comes together giving you that "perfect shot". and then your boss reminds you of the refreshment cart. 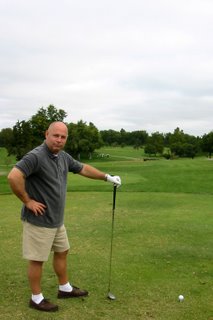 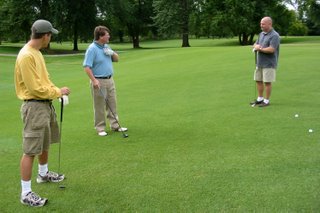 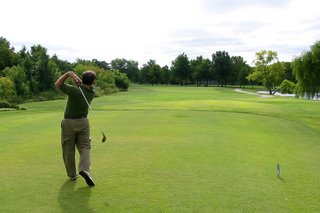