i was introduced to the vietnamese soup know as pho several years back from a group of friends when we were all nursing a new years eve hangover.  since that day, i've been a fan. 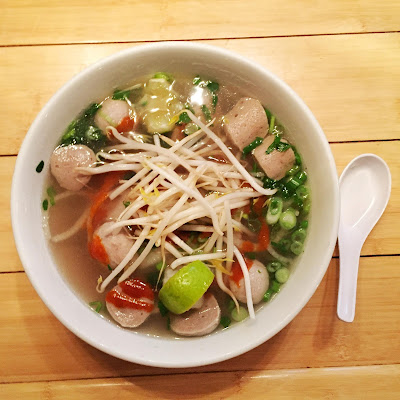 pho is definitely one of those dishes where you can get into great heated discussions on which place has the best as well as brag about any place you've "discovered."  when i lived in wichita, i had my preferences on which places to go; however all that pho knowledge was lost when i moved to maine.  to add to the problem, not many of my new northeast where as familiar with the dish as my drunken wichita friends were.

thankfully a few years back i introduced my wife to this perfect bowl of soup so she has had no problem hitting up different vietnamese places around town to try out their pho.  over the last three years we've been on a small quest to find the best pho in portland maine.  well i'm pleased to announce we found it, and it's in westbrook, maine.

my wife, ever looking for a new pho restaurant to try, heard about a place from a local food blogger 207 foodie called phoever maine.  one snowy winter weekend, which is just about every weekend here, we drove to westbrook to try it out.  it was located in a strip center, which in my experience actually means it's off to a good start.  we walked in and it was fairly full...another good sign.  we both ordered pho and anxiously awaited our bowls.  a few minutes later we were both peering over the bowl breathing in that sweet pho aroma.  with pho it doesn't take long to know if it's good or not.  one sip of the broth and you'll know.  we both tried a sip and were immediately in love.  adding a few sauces and garnish and we were off.

if this was a movie rather than a blog this paragraph would just be a montage of us eating, because we were there a long time enjoying every last drop. 90 minutes later and we had finished the entire bowl and my wife asked me what i thought.  i was hesitant to admit my true feelings because up until this meal, i had been the one to find the best pho place, but i knew that she had indeed found it; a competition i really don't mind losing.  needless to say we have been back and it was just as good.