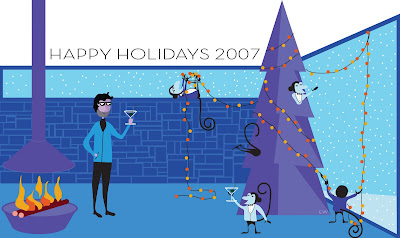 last saturday, wichita got covered in a snow storm, one of the larger ones we've had in recent years.  anyway, i awoke saturday morning with a very large to-do list i had made for the weekend before christmas, but upon looking outside, and realizing that i couldn't see across the street, i decided that i might have to wait a few hours before venturing out.
after lunch, and feeling a little claustrophobic in my apartment, i went down to the parking lot to start my day, but the three snow-stuck cars in the street convinced me to head back up-stairs.
grumble, grumble, grumble..........
after heading back to my apartment, i decided that i would beat this storm, i didn't need my car, i'd just walk everyplace i needed to go! ha!  so i bundled up like randy parker, ralphie's little brother from "a christmas story" and headed downstairs.  i made it about two blocks before i realized this was a bad idea as well.
i threw in the frozen towel.
so i decided to make the most of a day inside. so i made a pot of coffee, grabbed a blanket and sat down to watch my favorite christmas movie, and although that was really the only thing i accomplished that day, it was very satisfying.
almost all of wichita was shut down.  restaurants and stores closed, roads were un-drivable, and it appeared that most people decided to stay home.  looking back, i think it was a gift from the big guy upstairs.  the days leading up to christmas can be so incredibly busy, and usually for the wrong reasons.  i think this was a way for him to say, let's all take a little break and slow things down.
i'm hoping that most people out there spent a little more time inside with the people they loved, and a little less time getting frustrated over a parking spot.
but alas, it's time to end this post, so i can go and do my last minute christmas shopping.
"remember the night we broke the windows in this old house? this is what i wished for"  -mary
Posted by ercwttmn at 12/24/2007 04:00:00 PM No comments: Links to this post

last thursday i headed out on a spontaneous adventure...well, spontaneous...yes, the adventure part is questionable.

i heard about a little thing called the geminid meteor shower, which was supposedly taking place that night. i quickly clicked over to wikipedia where i read that the geminids reach their peak dec. 12th through the 14th, and with a new moon currently in the skies, this annual event would have perfect viewing weather.

side note: i had no idea meteor showers were annual? anyone else.......hmmmmm, the stuff you don't learn in architecture school.

the best viewing time for this astrological show, would be between the hours of midnight and 2 a.m. not really having anything scheduled during that time, i decided to head out. thinking this would be a great time to try out some night photography, i loaded up a thermos full of coffee, put on my long johns, two coats, gloves, grabbed the tripod and headed north, out of town.

i drove until the lights of wichita disappeared, and then turned onto a dirt road. as i set up the tripod i could see the metors already streaking across the night sky! perfect! i angled my camera 45 degrees away from the star of castor which is in the constellation gemini, internet knowledge gained an hour before my trek, and set a long shutter speed.

i took several pictures, some of which as a metor went by. this would be great! what an event to capture on film!. as it was very dark, and viewing a picture on a tiny screen of the night sky doesn't show very well, i would just have to wait until i got home to view my captures.

getting back home about 2:30 i uploaded the pictures, and double clicked! scrolling through the photos, i realized, not a single one had even the faintest hint of a comet. putting them in the little digital trash can on my desktop, i went to bed, disappointed.

i almost hate to admit, but it took me a couple of days to realize i had still seen an amazing show. i just hadn't captured it on film. i had the memory, and it was still amazing.

what is it about seeing a "shooting star" that remains just as magical as it did when you were a young....

i guess some memories just aren't meant to be on film....


but as i like to say, "when the world gives you lemons, use photoshop".

so to make this blog entry slightly more interesting, i've added some pictures i saved from the trash and photoshoped for your delight. 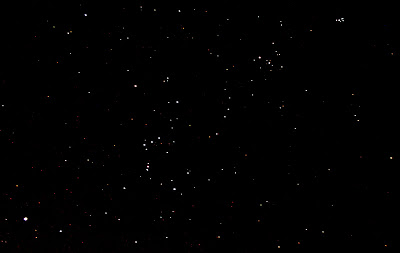 in this one, you can almost see the constellations: click to enlarge. 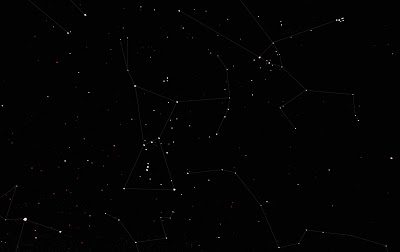 close up of orion's belt: this one is tightly cropped, and the contrast adjusted heavily, but that's all....a little creepy. 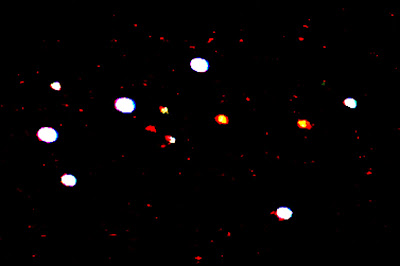 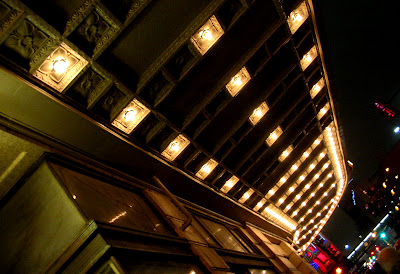 last friday i woke up and checked the local paper, for any interesting news. sure enough, right on the front page, i found something worth reading.

the wichita orpheum was unavailing it's newly renovated lobby friday night, along with a free showing of "the philadelphia story".

i emailed some friends, and before lunch, had a small group ready to partake. i warned them to dress warm as we were going to experience it all as they did in 1922. we all meet at my apartment, and proceeded down to the new restaurant and bakery that just opened up on douglas ave. we ordered ordered "black and white" cookies, and coffee to help keep us warm during the downtown trek.

i was pumped! how exciting! how urban! how nostalgic! this had to be the hottest thing going on in wichita that night!

as i turned the corner at first and broadway, what to my wandering eyes should appear? but the above 65 crowd bundled up, standing near.

the sidewalk was packed with people, anxiously awaiting to get in. at six thirty they opened the doors and let everyone enjoy the new lobby. the restoration was beautiful. obviously i had no idea what it had once looked like, unlike a some of the others standing near me, but it gave the atmosphere of craft and grandeur, which isn't experienced much in this day of age. as if the lobby wasn't exciting enough, none of my friends, including me, had ever seen "the philadelphia story". we took our seats, the lights dimmed and the movie started. now, i'm not sure it if was just the atmosphere or the crowd, but the movie was incredibly entertaining, providing laughs the whole way through. but with jimmy stewart, cary grant, and katharine hepburn, how could you go wrong? everyone else in the group felt the same way, as we discussed how much we enjoyed it, the whole walk back.

so here's to classics's. be they renovated or newly discovered!