in the last post, i mentioned a road trip for my spring break. i eluded the fact that the road trip actually had a purpose. it was to get us to new orleans. some fellow classmates and i drove down to help with a design-build project our professor set up in the ninth ward. i had no clue what to expect for those seven days, i only knew that this would be a chance to see a part of the country that i haven't seen before, and more importantly, it would be a chance to volunteer, and give help where it is desperately needed.

our project is to rebuild a museum, and home in the area known as the lower ninth ward. the house and museum belong to a man named ron. ron is a pillar in his community, and has decided to come back and rebuild his life. through various connections with tulane university and other compassionate people in the community, our professors non-profit organization got involved.

a few years back, ron built a museum in his backyard, showing the history of the mardi gras indians of new orleans. the mardi gras indians formed around the time of the civil war. the recently freed slaves, identified with the indians, and choose to represent them in mardi gras celebrations. people spend all year designing and making elaborate beaded costumes to wear during the celebration. ron is considered a chief of a tribe, and spends his time making costumes and passing on the tradition to the younger generations. to help keep the history of the mardi gras indians alive and also have a workshop, he built a small museum in his backyard. however, living in the lower ninth ward, the flood waters took his house, museum, and any artifacts he didn't have room to pack during the evacuation.

our goal over the next few months is to help ron rebuild his home and museum. over spring break, we met with him to discuss different designs, and to gut what's left of his house. the hope is, that if we can get ron back in his place as the pillar of this community, he'll give the support needed for others to follow, and this neighborhood will experience a "rebirth".

i learned an enormous amount on this trip. there were highs and lows. from seeing the devastation and destruction of a levee break, to seeing the spirit of new orleans in the french quarter, and the sense of community in the ninth ward. there is so much to say, and so many pictures to show. i've organized my pictures, in a hope that it will also organize my stories. click for larger views, or for more photos, click on [my_photos] under my links.
[road trip]

the road trip took longer then expected. eighteen hours in a car can be exhausting. our only stops were for gas and to try "white castle" burgers, which i had never had before. supper consisted of some great bbq outside memphis. the trip was filled with laughs from stories and movie quotes. we ended up getting to our camp at 2:30 in the morning, where we then had to find an empty cot, in a tent with 400 other sleeping volunteers. i really didn't get a sense of my surroundings until i woke up the next morning realized just how many people were in the tent.
[ninth ward]

these are pictures from the lower ninth ward, near where the levee broke. this is the one of the most devastated area's of new orleans. from what i was told, almost nothing has changed since the hurricane. they are now repairing the levee where it broke, but most of the residence have lost confidence in it's construction.
[french quarter]

we took part of a day to explore the french quarter. we drank coffee, ate beignets and drew in our sketch books all around the district. being born and raised in the midwest, i found the architecture, lifestyle, and over-all feel amazing.

most of the week was spent working on ron's house. we finished gutting the inside, tore down what was left of the museum, and cleaned up his yard. we piled everything up in the street, to be picked up. after getting the inside down to the structural members, the next step will be to kill all the mold left on the wood.
[bbq and pin-up]

wednesday night, ron, his family,friends and neighbor's, hosted a bbq for us. they grilled hamburgers, chicken, sausage, and ribs with home made sauce. it was then, that i saw how strong the sense of community was here. ron knew everyone, and we were thanked over and over again for our help. we were informed that gatherings like this were a standard, but this neighborhood had been without one of these bbq's since the hurricane. ron's wife was especially happy to see her friends again. after eating we pinned our idea's for the house and museum up on the back wall. with the neighborhood still without electricity, we had to show our ideas with the help of flashlights.
[doors of the french quarter]

walking through the quarter, i couldn't help but notice the beauty of the doors, so i took a few pictures to show the variety. it's also noticeable that back then, the architecture reflected the fact that we had little control over nature. the buildings were raised in case of flood, the windows had shutters that actually close, and the balconies are light and airy, to provide shade, and allow the breeze to come in. why have we forgotten these ideas?
[french quarter close-ups]

some close up pictures of the french quarter. i saw a number of notes on the doors, just letting people know when they'd be back. i found ferns and other plants growing directly on the side of walls, and a door that has more stories then i will ever have.
Posted by ercwttmn at 3/26/2006 12:52:00 PM 2 comments: Links to this post

why are road trips so great? "because getting there is half the fun" -according to my friend clark. so for this final spring break, i wanted it to include a road trip somehow, although it'll only be a fraction of the week.

spring break for us, unofficially starts at 5:30 today, and tomorrow morning i'll be heading out into the unknown. i'll be squeezed into a small car with three other guys, who i like to call [3/4 gas money]. only one of these guys is a close friend, the other two are just acquaintances. i'm thinking this will actually help pass the time, as there's nothing better then a road trip to get to know someone. i have no idea what to expect on this very loosely organized trip, except that i'll get out of the confines of seaton for a week, which in itself is a vacation. i'd like to try [road blogging], but i have no idea how often i'll have an internet connection. we'll see, for now i'll end with a qoute from a great road trip movie.

"Everybody in the car. Boat leaves in two minutes... or perhaps you don't want to see the second largest ball of twine on the face of the earth, which is only four short hours away. "

there are some things [money] can't buy 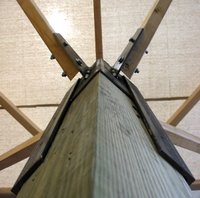 today, my group and i faced our final semester mid-crits. requirement: a full scale model of our proposal for our town. the lesson learned this weekend, was that even though the drawings may look good on cad, that doesn't mean that they will transcend into reality with actual materials.............. or that our woodworking skills are lacking. probably a little of both.

even with the frustration of realizing that the details were not correct, and making last minute design changes with the circular blade eating into the wood, it was a great experience. we lugged our modular structure into the atrium this morning and finished the assembly with the help of a two professors and a three ladders. the reviews went great, and we were given the necessary comments on how to take our project from being "lumber-sort-of-assembled" into actual architecture.

back to the drawing board. 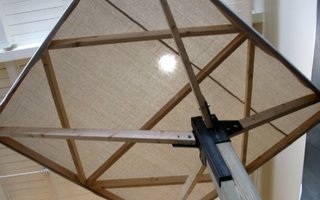 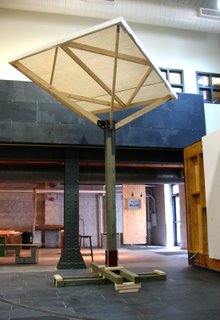 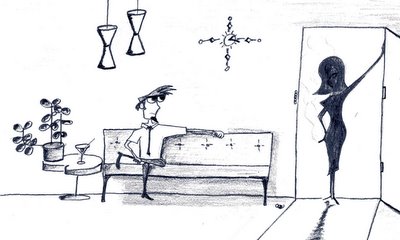 this week, i had time to work on a personal project. personal projects are those little creative activities that people enjoy doing. activities that allow the mind to rest from the tasks in their life they have to do, such as work, laundry, and cleaning the bathroom. in architecture, where you are constantly being judged on your work, i believe these are a must in order to stay sane. usually these personal projects are related to a hobby. some people knit, sculpt, build tables, or work on cars. my own projects usually involve photographs and art. this week, my personal project was to try and recreate, digitally, a pencil drawing of mine from a few years ago, titled "the unkown woman". i'm pleased with the way it came out. i love the colors and the crispness in the computer generated one, but there is still something about hand drawings, that give the art a quality you just can't create on the computer. i find this to be true in a lot of ways, as more and more of our lives become "digital". the digital one was quicker, and mistakes are almost non-existent, but does that make it better? I don't know. 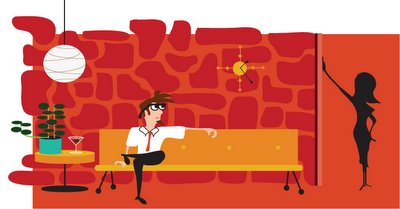