since i've started hanging out with the bike guys, i've had an itching to get another bike. i love my current bike, but i wanted something a little older, and a little nicer. i wasn't taking it too serious, just occasionally checking craiglist, and newspapers. however last spring, my schwinn started having troubles braking, which i've learned is an important part. i took it to a shop, where it would eventually sit for two months while they tried to find a part for it. during these two months i sat in my apartment, thursday after thursday, not being able to ride, while bikes cruised past me down douglas. 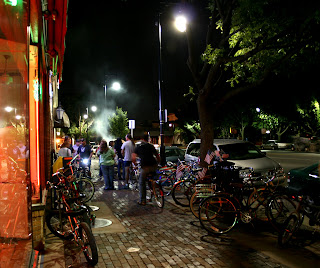 then a craiglist posting was sent to me about an old bike, a 1948 monark! a real "fat tire" bike! checking it out, i was thrilled, it was exactly what i had been looking for. i called a minute later and said i'd be by to check it out.

once at the house, i recognized the owner as a fellow bike club member! we chatted a bit, looked over the bike, bartered a bit, and finally struck a deal. however before i left i got a personal tour of his collection. i was blown away! it was like a bike museum! he had three garages filled with restored, customized, original, and parted out bikes! there must have been close to 100! i was in awe. here i was giddy over my second bike, and this guy had a small army of coasters! he was a serious addict, probably doing this since the 60's, and now he was dealing to me.

i loaded up my new wheels and anxiously awaited thursday night! seven o'clock came and i headed out. however i didn't make it far, a few blocks from my house my tire disintegrated and the balloon tube came out! a little disappointed but not out, i waked over to a gas station, bought a roll of duct tape and patched it up. this allowed me to ride one more block, before the whole tube popped, and deflated my dreams of riding that night. i walked my bike over to a spot where i knew the club would stop and waited. 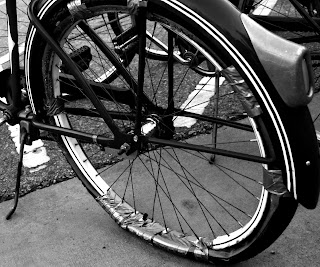 when they arrived, the duct tapped tire spurred questions and apologies were sent my way. after conversing a bit, i figured it was time to walk home, grab the truck, and pick it up, when another member spoke up and insisted that i keep riding! he could fix it! not really knowing what he meant, i explained that it was alright, i'd catch them next week. to which he said,

"nope, we're going to get some tools!"

i hoped into a car with him and headed to his shop, however during the process of finding the right tools, he thought,

"why fix it! just borrow another one of mine!"

i was now borrowing bikes, to continue to ride...

we loaded up the bike and headed out to meet the rest of the group. it ended up being an amazing night with over 70 bikes cruising the streets and sidewalks of wichita. also later that week, the new bike, eventually got new tires! 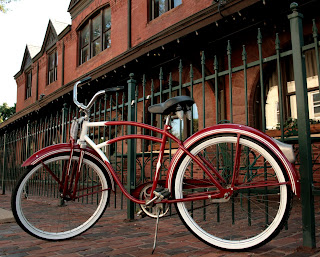 but now to the point. with gas prices approaching 4 dollars it's no surprise that bikes seem to be getting more and more popular. even in car-happy wichita, i'm seeing more and more bikes on the road, which is exciting. i'm finding that riding around thursday nights with a bunch of bike bums and addicts is quickly turning into a highlight of the summer.

if you happen to find yourself in downtown wichita this friday, and you'd like to get a peek into this weird and wonderful show, the go away garage is hosting the "art of the bicycle"! a show celebrating bikes and bike related art! see poster here!
Posted by ercwttmn at 7/24/2008 12:40:00 AM 2 comments:

i've been a little nomadic the past two years.

not so much globally or nationally, but within the border lines of a territory known as "the office"

when i first started working there, two years ago, my boss graciously gave up his desk, so that i could feel at home. it was great! i had a huge plot of land, with nothing fill it, except the occasional stack of red-lines handed to me to. i started to fill it with a collection of pens and pencil's and even brought in a plant. i was at this location for about 8 months, what i like to call the "honeymoon" period. 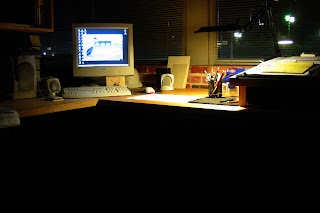 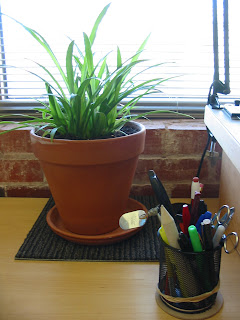 when someone else was hired and i was shifted. i moved to a very small table in the conference room. it took some time to get use to it, but i eventually fell in love with this situation. i was crammed in there with two other guys, luckily, we all got along. we all preferred to work with just our desk lamps on instead of the overhead fluorescents on. with great music playing it was almost reminiscent of studio.

being behind a wall of glass, right off of the reception room, i like to call this period of time, the "fish bowl". this lasted about 8 months.

then work began on our "new" office. we had been holding conference meetings in the raw space, but with construction starting we needed the conference room back. this required me to move to a counter top, right next to my boss. a time i refer to as the "lap dog" period. 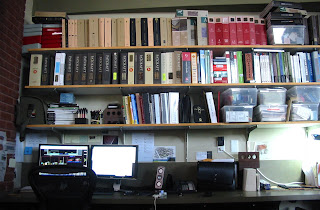 i try to make the best of every situation, but it was tough in this location. not only was i in a main traffic way, but i was sitting nearly on top of my boss. also, by this time i was getting more and more work, and had very little room to place anything. i did however, learn all of our carpet reps by name as they chatted with me while placing new catalogs. knowing that it would last long kept my spirits up. i was promised that it would only be temporary, we'd be in the new space after the first of the year.....then it was, maybe by february...then by march......possibly by april......for sure by the end of may.....

to make a very long and very boring story short, we finished up the new space last week, and moved in. i'm thrilled. it's probably the best week i've had at the office! after two years, i finally feel settled.

of course, the only foreseeable problem that may arise, is the fact that i moved into the one desk that will have to be demo-ed when "phase 2 " happens.....

here are some pictures of the new space. 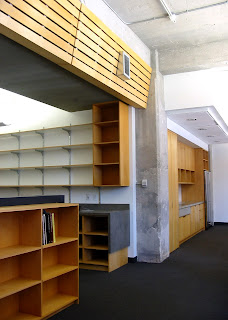 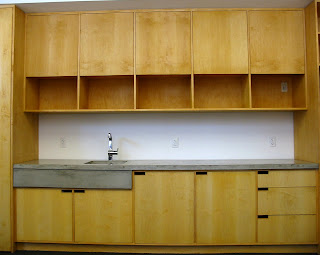 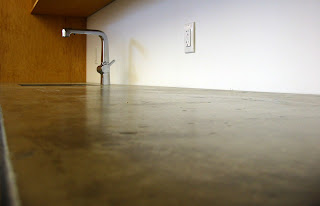 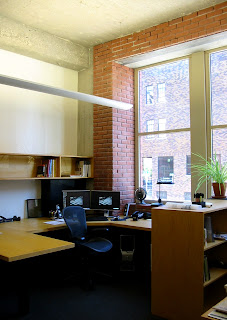 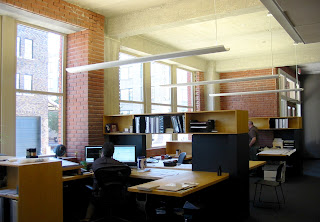 a little late on this issue... 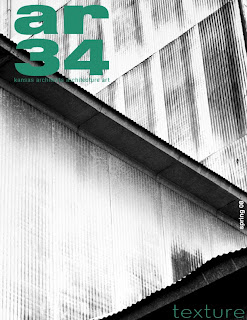