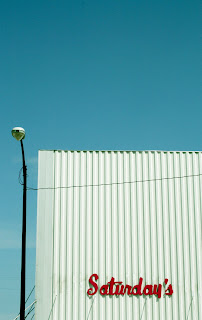 a few weeks ago, i took a weekend trip to the lake to meet up with some friends of mine. being that i had never traveled to this lake before, i was sent directions. google maps quickly and graphically showed me that i would not be taking the interstate there, instead it had me driving down ol' highway 54 the whole way there. i was less then thrilled. five hours of highway driving did not sound that relaxing to me, but alas, it did look to be the quickest way there. i packed some clothes, got in the car and headed out. immediately getting onto highway 54.

"well, five hours on this road and then turn right" i thought to myself.

it didn't take long before i had ventured farther on highway 54 then i ever had before. it was just about the time i stared thinking that to myself that i began noticing something i had over looked. i was now traveling down an old highway, a popular path during post war america, and what was used during that time to attract fun-loving fifties-era families out of their ford fair lanes and forgo faring any farther? non other then GOOGIE motel signs!

they were everywhere! every small town forcing me to slow down, greeted itself with some form on space aged sign directing me to a motel. towns that may have felt slighted not being graced by the interstate system, now little jewels of americana, uncluttered by the commercial development that seems to grow well at off-ramps. watching and waiting to see what the next town had in store made the trip very extremely enjoyable.

after spending a very relaxing couple of days at the lake, i headed home, camera in the passenger seat. stopping in a number of small towns, i photographed these road side relics.

their atomic forms, standing there, on the side of the the road, faded by decades of sunlight, as a reminder to a simpler time of life. a time where the journey meant just as much as the destination.

something i think we all say we'd like to do....but something very few of us achieve... 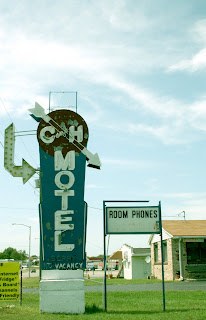 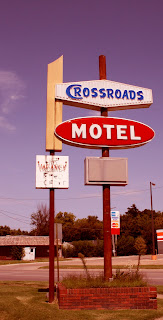 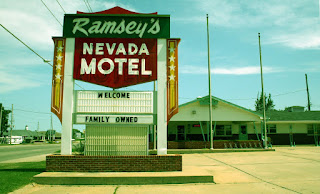 What a happy accident!

i love old motel signs! great job capturing those...very cool! we might just have to take a drive on old 54 in the near future. :)