the [shows] of summer 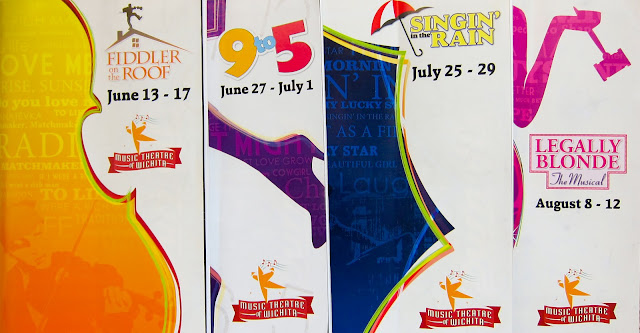 one thing i miss terribly after entering the working world is the annual rhythm the educational system provided.  for twenty some years, it was ingrained in us the summer was a time to relax and take a break, a chance to get our minds back to neutral and recharge.  then in august, you would be presented with new teachers, new classmates, and new subjects to learn.  this constant annual change created clearly defined chapters in minds ever expanding memory book. songs, movies and other pop culture events are easily recalled because i know exactly what grade i was when they happened.  since getting a real job however the years are molding together forming a long, heavily architecturally worded, run-on sentence that just goes on and on, never changing, always staying the same.

that being said, there are a few things in my life providing some annual rhythm.  for the past six years i've purchased season tickets to wichita's music theater which spans ten weeks during the summer.  the first performance always gives me the feeling of the summer beginning and as the curtains close on the last show i'm reminded summer is coming to an end as well.  this year, however i changed the tradition slightly.  not only did  i purchased season tickets along with a couple of wonderful friends, but they were also for a different day of the week.  not a huge difference, but still a change.

all the shows this season were wonderful, with my personal favorites being "singing in the rain" and "fiddler on the roof".  ironically both musicals deal with the theme of adapting to change in the face of tradition.  one being the onset of "talkies" in a world of silent movies, while the other deals with changing morals, and expectations in a very traditional world filled with cherished customs.  i think reb tevye sums it up best when he says,

"without our traditions, our lives would be as shaky as... as... as a fiddler on the roof!"

all this got me thinking, what ingrains memories better in our mind, following tradition and doing same thing over and over, or breaking from the norm and changing tradition?  can you only break the norm and do something different, if there's a norm to break from?  do you have to have both?  i'll stop there because i get the felling i'm getting too philosophical for midnight on a tuesday.

i'm not sure if it's the fact i went on thursday's this year, or because the shows were enjoyed with wonderful company, or the chardonnays quickly consumed during intermission, a new tradition i was introduce to, but the summer musical season of 2012 ended up being extremely enjoyable and will hold a very memorable place in my mind.
Posted by ercwttmn at 8/22/2012 12:28:00 AM