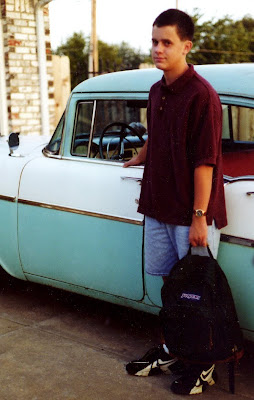 let me explain how all these tie together.

american graffiti is one of my favorite movies, and one i especially love to watch this time of year. if you've never seen it, it's basically a group of high school kids enjoying their last day of summer in 1962. besides having a very enjoyable plot, the movie includes an amazing soundtrack filled with just about every song played in 1962. it wasn't hard to fill the movie with these songs since most it consists of driving around in classic cars. although i didn't grow up in the early 60's, the movie is not far off from my small-town-america high school days. watching this flick laid the first piece of the late-nineties-nostalgia-flash-back puzzle.

also last week, i had lunch with one of my best friends, garrett. not only did garrett and i go to school together, we also worked at the same job. when we weren't at school, or at work, you could still find us hanging out or driving around town. at that age most of our conversions involved girls, which basically meant we tried to figure out ways we could get girlfriends (looking at the above picture, i think i know what one of my problems may have been). although garrett and i don't see each other as much as we should now, eating lunch the other day felt like old times. still talking about girls, still trying to figure them out. second puzzle piece set.

driving back to work after lunch, the song "say you'll be there" played on the radio, and the puzzle was complete. i was immediately taken back to 1997, and all of it's doc martin glory. whether we were at work, or cruising around town, garrett and i always had the radio on and, sadly, "say you'll be there" was on heavy rotation that year. sitting back at my computer, i went to work creating a "97 jams" play-list. as many of you know 1997 wasn't the best year for pop music, but there's something about the list i love. it reminds me of when i was 16 and didn't have a care in the world, besides making sure to fill up my car when gas dipped below a dollar. i think we all have a "summer at 16" soundtrack, and like it or not, we really didn't get to choose it. (especially those of us who hadn't saved up enough money to install a cd player in their car yet). with or without a cd player, we all have those songs, taking us back to a time where we weren't really kids, but still far from being adults.

for better or worse, here's mine:

say you'll be there - the spice girls

What a fantastic play-list! You've inspired me to make one myself and cruise around town, top down, wind in my hair. Of course, that would require me to actually locate a spiffy car...meh, details! :)